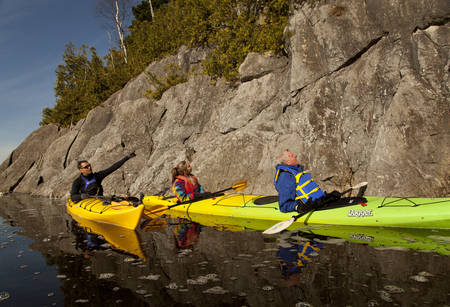 The Stonehammer UNESCO Global Geopark is located on New Brunswick’s Bay of Fundy, at the confluence of the Saint John and Kennebecasis rivers. The UNESCO Global Geopark is bounded on the south by the rugged coastline of the Bay of Fundy; east along the Fundy coast to the Village of St. Martins and the Fundy Trail; northeast to the Village of Norton; west to Little Lepreau and Lepreau Falls; north to include the Kingston Peninsula, Welsford and the Jones Creek area; and along the Saint John River valley to Hampstead.

Southern New Brunswick was one of the first places in Canada to be explored by geologists. In 1857 a group of young men in Saint John formed the ‘Steinhammer Club’ to explore the geology near their home. Even earlier, in 1838, another city resident Dr. A. Gesner began work as the first Provincial Geologist in the British Empire. Gesner opened one of the first public museums in Canada. Steinhammer Club members used Dr. Gesner’s reports as a guide to their work and later founded the Natural History Society of New Brunswick. Geologists have been visiting the area we have called Stonehammer ever since and continue to make new discoveries.

Stonehammer UNESCO Global Geopark incorporates more than 60 significant geological and fossil locales, with more than 12 publicly accessible sites. The geology of Stonehammer is complex, but reasonably well understood and provides ample opportunity for geological investigation and education at all levels. The landscape of the Stonehammer UNESCO Global Geopark has been created by the collision of continents, the closing and opening of oceans, volcanoes, earthquakes, ice ages and climate change. The rocks of our Geopark have been witness to the evolution of life, from the first discovery of Precambrian stromatolite fossils, to the ‘Cambrian Explosion’ of life, to the evolution of vertebrates and the emergence of life on land. The Geopark includes geological stories from late Precambrian time a billion years ago to the most recent Ice Age, and almost everything between.

Stonehammer UNESCO Global Geopark encompasses 2500 km2. It is a mix of urban, sub-urban and rural communities with a total population of approximately 150,000 people. The City of Saint John is at the centre of the UNESCO Global Geopark, which also incorporates the towns of Rothesay, Quispamsis, Hampton, St. Martins and Grand Bay-Westfield.

The UNESCO Gobal Geopark’s goal is to educate our students, community and visitors about the Earth in a fun and engaging manner. Focusing on the region’s geological history, the events and processes that formed it and the connections to our modern society are the pillars of Earth Science Literacy for New Brunswick. Specifically, bringing understanding to challenges in our communities such as understanding energy and mineral resources, changing climates, and water shortages.

All activities and field trips developed for school programming are engineered to address curriculum outcomes focusing on grades 4, 7 and High School, including workshops for educators.

Community programming is presented at events happening in communities as well as providing presentations to service groups, corporations, and conferences. Events that have a high yield such as Canada Day and Port Days are attended annually and smaller events are rotated from year to year.