“If stones could speak…” 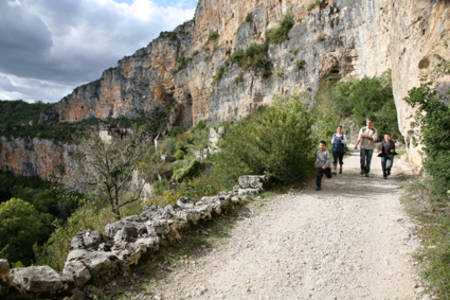 Causses du Quercy UNESCO Global Geopark is located in the southwest of France, at the northern end of the Occitanie / Pyrenees-Méditerranée region. The limestone plateau of the Quercy, called Causses, stands out from the low plains of the Aquitaine Basin bordering them to the south and west (average 135 m above sea level) and from the mountainous area of the Massif Central situated to the north and east (average 700 m above sea level, culminating at 1,885 m).

The Causse is formed by Jurassic carbonate rocks deposited during the opening of the Atlantic Ocean, and is the result of an intense karstic polyphaser activity that started 70 million years ago. As the result of unique geological circumstances, the Quercy “phosphatières” form an exceptional fossiliferous recording. In fact, those ancient phosphorite caves were carved during a first karstic period, and then sealed by phosphate-rich clay containing thousands of fossils in perfect conditions of preservation. The Quercy palaeokarst is the longest chronological sequence currently known in a continental domain worldwide and enabled the recording of the climatic and environmental conditions for the evolution of life (European reference for the upper Eocene and Oligocene epochs). 3.5 million years ago, resumed karstic activity allowed for the development of typical karst landforms such as swallow holes, resurgences, caves, chasms, and dolines. It thus made this area a true “natural evolution laboratory” of international significance.

Each of the 48 geosites accessible to visitors tells a part of the local geological story and the close relationship humans kept with the geology of their territory. Four categories describe geological interest of each integrated geosite: paleokarst, use of the karst by humans, natural karst and geological history of the territory. On the other hand, the 110 other geosites dedicated exclusively to research.

Causses du Quercy UNESCO Global Geopark is so named because of both its geology – the Causse, and its historical identity – the Quercy territory of the Cadurques Gallic people. With a total population of 30,967 inhabitants, the area has a low but homogeneous density of 17 inhabitants per square kilometre.

What strikes the visitor to the territory is the omnipresence of the limestone rock as a major resource: every house, every low wall, every shelter is an evidence of this link between human and stone. More generally, it is the way people knew, at all times, how to take advantage of the karst that underlies the identity of the territory, “the caussenard identity”.

Throughout the ages – the oldest preserved vestiges are 400,000 years old – humans strove to use the available resources from the karst. These included cavities to trap animals, caves habitation or decoration thanks to the locally available pigments, limestones for megalithic tombs, houses, shelters, low walls, etc., to phosphatic fissure fillings of the karst for exploitation. At the same time, humans developed solutions for its survival such as the carving of basins able to retain water within the limestones, the clearing of stones from the dolines and dry valleys. These anthropogenic arrangements are true treasures that show how people adapted to their geologic environment and that has literally shaped the Causse landscape.

The territory of the Causses du Quercy UNESCO Global Geopark is a rural area. Its economy is mainly based on agriculture, craft and tourism. The Geopark strives to develop tourism for the benefit of the whole territory. The Geopark also chose to favour family-type tourism and supports its collaborators in the implementation of “child-family” specific offers.

Since 2009, the programme called “Paleontologists seeds: take part with your students in a paleontological study in the phosphorite caves of the Quercy” has been renewed each year in partnership with the French Ministry of National Education. Pupils mainly from the 2nd year of Collège (12-13 yr old pupils) and from the 1st year of Lycée (15-16 yr old pupils) participated, from 34 schools within the education authorities of Toulouse, Bordeaux and Paris.