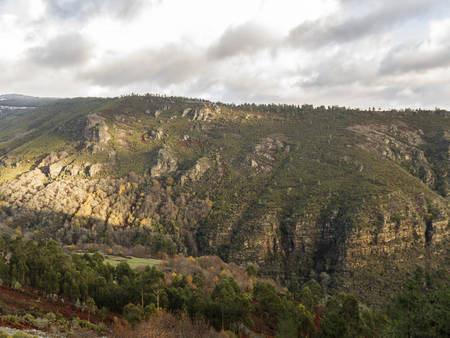 The Courel Mountains, in the quiet northwest corner of Spain, are home to tranquil forests and Galacian communities living among the remains of medieval villages. It is one of the mountain ranges within the Iberian Massif, and is characterized by high peaks and deep river valleys. The site covers a surface area of 577.85 km2 and borders the Atlantic Ocean to the north and west.

For researchers and geo-tourists, the mountains are a perfect space to observe Earth’s geological history, specifically from the Lower and Middle Palaeozoic era, and, to a lesser extent, the end of the Tertiary and Quaternary periods. The area is also abundant in vegetation, including a variety of oak, beech, yew, alder, and chestnut trees. At an ecological level, this is one of the most diverse points of the peninsula in northwest Iberia.

This region is shaped by the rivers Lor, Louzara, Quiroga, Soldón and Selmo, which have created a morphology of deep valleys and canyons continuously carved by erosion. Some of the highest summits of this region display clear remains of glacial modelling.

Much of the local villages retain their traditional structures and materials. For instance, the fine grained slate rock of this region has been a central economic commodity since the Neolithic era, and is often used for roofing.

This rural area is increasingly depopulated, and currently has 5,406 inhabitants, however, the area has a rich cultural history. The remains of pre-historic fauna and flora, including Neolithic paintings, can also be found preserved within the deep caves of the mountains.

The area is dotted with pre-Roman and Roman settlements known as ‘castros’, and ancient villages made up of thatched-roof houses known as ‘palloza’. It is estimated that between the first and second century AD, the Roman Empire had dozens of active gold mines in this region thanks to the Paleozoic primary gold associated with the erosion of quartz dykes and concentration of their deposits. Historic and modern-day pilgrims have passed through these forests as they follow the Way of Saint James, a cultural route leading to monasteries and other religious landmarks, such as the Cathedral of Santiago de Compostela. Many of the urban centers in this region consist of structures the Romanesque, Gothic, Renaissance and Baroque epochs.