“The Earth below the Vulkaneifel is still in motion, pushing the surface one millimeter higher each year” 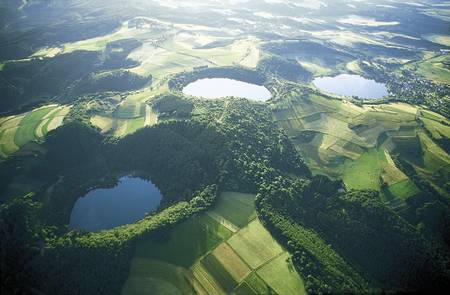 Located in the middle of Central Europe, at the northwestern part of the ‘Rheinish Slate Mountains’, the rolling Eifel highlands are a hilly land-scape with deep, glacially carved valleys cut into old Devonian sediments (360-415 million years old). Volcanoes dot the landscape, with 350 known eruption centers, and give the area its name – Vulkaneifel UNESCO Global Geopark.

Two volcanic phases created Vulkaneifel. The first was active around 45 to 35 million years ago, the second phase around a million years ago that ended with the most recent eruption, the Ulmener Maar, 10,900 years ago. Around 350 eruptions have been recorded in the Vulkaneifel, of which around 270 were during the most recent phase. The area is the international type locality of maar volcanoes. In some craters, bogs and lakes have formed while others remain dry. Known as ‘maar’ craters, these bodies reveal a nearly uninterrupted stack of sediments dating back to 150,000 years ago that provides data for the reconstruction of past climate, vegetation and ecology. Since the 1980s research focusing on the varve bearing sediments of the waterfilled maars as well as the dry-maars made it possible to reconstruct an annual calendar for the last 23,000 years with seasonal resolution. Ongoing research in the maar sediments today allows a view back to some 130,000 years ago. Vulkaneifel is the most important climate archive for Middle Europe. Similarly, fossils found in 43 million years old sediments of Eckfeld Maar are of worldwide importance, since they contained an archetypal horse and the oldest known honey bee.

The Vulkaneifel has attracted geoscientists for 200 years and many international research projects have been conducted here. The Earth beneath the Vulkaneifel is still in motion. In fact, the surface of the area still uplifts by one millimeter per year rate.

The municipalities which are located totally or partially inside the Westeifel Volcanic Field are members of the UNESCO Global Geopark and define the administrative scope of the UNESCO Global Geopark organisation. The population is about 83,000 inhabitants living in 180 villages and few small towns. The rural region is the most important highland tourism area in the federal state of Rhenania-Palatinate. For the past 30 years, efforts to foster economic development have focused on the area’s unique geological heritage. The tourism-intensity-rate is 2,150 (fivefold of the German average).

The remit of the Vulkaneifel UNESCO Global Geopark is generally defined in terms of “aesthetic conservation” that looks forwards, not backwards. Geo-heritage and the landscape in the UNESCO Global Geopark should be protected and developed in such a way that the economic existence of the people who live there is continuously secured. However, sustainable business and trade do not automatically originate in a single market. Globalisation often destroys existent, sustainable forms of business. Rather, it must be promoted carefully through consumers, producers and policies. To achieve the environmental objectives a masterplan was developed combined with a targeted commitment to sustainable business and sustainable regional development. The UNESCO Global Geopark finds itself in the role of a regional management tool. It is about consciously combining and pooling all the strengths of the areas of business, the community, culture, the environment and politics in the nature park area under the umbrella of “sustainable regional development”. The most important economic sector is composed of small and medium sized metal and mineral water industries, handicraft and the health sector.

Today there is well-developed geotourism at Vulkaneifel. Five museums and about 350 marked and described geological outcrops present the geology and guide visitors through the fascinating landscape. The aim is to bring visitors closer to the area’s remarkable geology and promote the conservation of geological heritage and sustainable economic development. Other services include: individual trips, half daily routes, as well as excursions of one or more days. Arranged according to different geoscience topics, but also botanical or culture-historical ones, the hiking trails permit an incomparably intensive and active visit into the charm of the Vulkaneifel wonderland. Environmental education packages for residents and visitors as well as imaginative public relations should further increase acceptance of sustainable businesses as well as of earth heritage and countryside conservation and encourage a deeper bond with and commitment to their region by the people.