“With 313 cultural sites, including the Great Wall, the heritage at Fangshan extends well beyond geology” 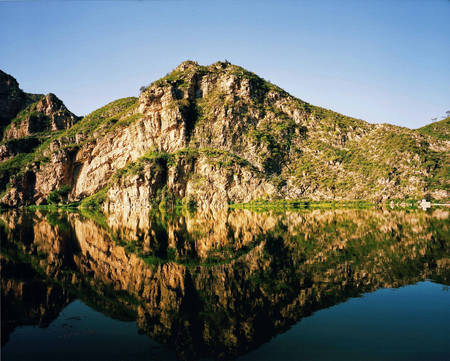 Fangshan UNESCO Global Geopark of China is in the Asia Pacific region, set on the border of southwestern Beijing and Hebei Province. The Geopark spreads across two provincial and municipal jurisdictions and three districts and counties, covering the Fangshan District of Beijing, Laishui County and Laiyuan County of Hebei Province. Sea-level elevation ranges from 26 to 2,161m.

Fangshan UNESCO Global Geopark holds very rich geological remains and has a complete series of rock formations developed over 3,500 million years. A wide variety of rocks can be found in the UNESCO Global Geopark, including sedimentary rocks formed in marine and terrestrial environment, metamorphic rocks created by regional dynamometamorphic processes, granite formed from solidified lava, different tectonic features shaped by crustal movements as well as ground and subterranean rivers, karst peak clusters and caves resulting from erosion processes. In the Geopark, the well-developed surface karst landforms and many caves are typical representatives of North China’s landscape and are of great interest. Tower-shaped mountains jut into the sky and make for grand scenery while the curtain-like mountain ranges extend for tens of miles in a seemingly inaccessible panorama so close to the urban center.

The discovery of “Peking Man” in the Geopark in 1929, one of our ancestors who lived in the area 700,000 years ago, astonished the whole world and the site has since been recognized as one of the birthplaces of humankind. These precious geological remains inspired China’s first geological survey more than 100 years ago and fostered China’s first generation of geologists. Even today, Fangshan UNESCO Global Geopark is a cradle of geology professionals, having nurtured some 50,000 geology students who spent their internship and lectured in the park, and thousands of them have become geologists. The first Chinese Geology Dictionary was published here; moreover, many geological terms were officially named here. Bestowed with unparalleled geosites and heritage resources, Fangshan UNESCO Global Geopark is a veritable “geology encyclopedia”.

The long human history has made for profound cultural heritage in the Geopark. The architecture, grottoes, stone inscriptions, relics and ancient tombs comprise abundant cultural, geological and tourism resources.