“The first land of the western Java Island” 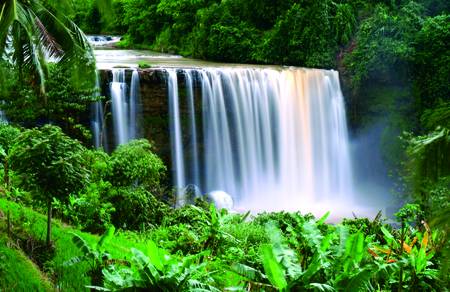 Ciletuh - Palabuhanratu UNESCO Global Geopark is located on the island of Java, in the western Sukabumi Regency of Indonesia. The Geopark is located on the border of a tectonically active zone: the subduction zone between the Eurasian plate and the Indo-Australian plate, which continue to converge at 4 mm/year. The area is characterized by a rare geological diversity that can be classified into three zones: the subduction zone uplifted rocks, the Jampang Plateau landscape and the ancient magmatic zone shifting and fore arc evolution. Evidence for a similar subduction process that occurred during the Cretaceous age (145–66 million years ago) is found in the Ciletuh area in the form of rock formations that were deposited within the deep subduction trench. These rock formations are composed of ophiolite, metamorphic, deep sedimentary rocks, and mélange complexes and are known as the oldest rock formations on the surface of West Java. In the Oligocene-Early Miocene (approx. 23 to 15 million years ago), the area underwent an uplifting and formed the Jampang Plateau. The tectonic process during the Miocene-Pliocene (5-8 million years ago) led to the gravitational collapse of part of the Jampang Formation, forming the biggest horse shoe-shaped natural amphitheater morphology in Indonesia and a series of waterfalls. The area can be also described as ‘the first land of the western Java Island’. The weathering and aberration process affected several rock formations and resulted in a unique formation of animal-shaped rocks. Since the Pleistocene (2.5 million years ago to recent), volcanic activity has been shifting to the north, resulting in hot springs, geysers and geothermal resources in the northern area.

The UNESCO Global Geopark is named after the Ciletuh River and Palabuhanratu (Queen Harbor), who according to a local legend was the Queen of the Southern Sea (Indian Ocean) and acted as a guardian over the coast. The Geopark comprises of 74 villages distributed over eight sub-districts (Cisolok, Cikakak, Palabuhanratu, Simpenan, Ciemas, Ciracap, Waluran and Surade). The total population of these villages reaches nearly 500,000 inhabitants (2014), dominated by the Sundanese, native tribal settlers in coastal areas. The communities in the Geopark are marked by diverse livelihoods, ranging from farmers and fishermen to teachers and government officials. Most of the income is generated through fishery due to the extensive coastline, which connects directly to the Indian Ocean.

Tourism will also become a source of income as visitor can enjoy the spectacular landscape of the UNESCO Global Geopark with its waterfalls, beaches, geyser, rivers, mountain, wild reserve, turtle conservation; and experience the life of Sundanese culture. The Geopark is a dream for adventure tourists as they can indulge themselves with surfing, paragliding, and rafting, canoeing, rock climbing waterfalls, snorkeling, diving, fishing and forest trekking.

Presently, several cultural village communities still adopt the ancestral Kasepuhan tradition, particularly in the field of agriculture such a rice paddy farming called tatanen. Cultural diversity is one of the main pillars of Ciletuh - Palabuhanratu UNESCO Global Geopark. Recognizing the connection between culture and human values, the welfare of local communities is of particular significance as it strengthens community life and is an indicator for social welfare. The involvement of local communities in initiatives related to Geopark conservation, education and promotion is therefore a principal factor in the sustainable development program of the Geopark. Through a community empowerment program, Ciletuh - Palabuhanratu UNESCO Global Geopark aims to grant greater access and independence to the public. These programs include participation, transparency and accountability as a means to learn collectively for a better future.