“Rock, cloud and sculpted pine combine to form a unique landscape that has shaped art and culture” 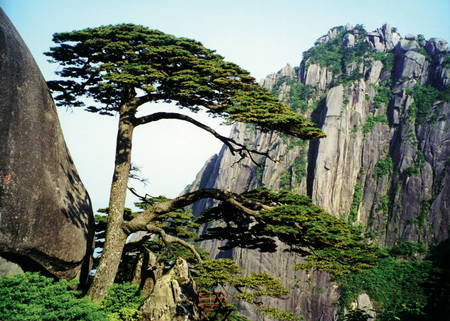 Huangshan Mountain is famous for its steep peaks of Mesozoic granite rising 1,000 meters high. Granites of the Yanshanian period are widely distributed along the west coast of the Pacific, but those with beautiful morphologic scenery like Huangshan Mountain are very rare. Globally, the Huangshan UNESCO Global Geopark is an ideal place to demonstrate the formation mechanism of granite geomorphology. Remarkable granite pillars take on amazing shapes – domes, cones, crests, columns and boxes – in the many valleys that radiate from the mountain. The geologic history dates to 140 million years ago, to the late Jurassic, when hot magma intruded upward through the Earth’s crust and created the material that comprises the mountain. Then, around 65 million years ago, the intrusive bodies created by the magma were uplifted. Weathering and erosion of the overlying rocks resulted in the formation of a patchwork of joints running in different directions. Huangshan Mountain as we know it achieved its current state 1.75 million years ago. This long history is responsible for the varied mineral composition and crystallization, uneven weathering resistance, and joint patterns that form the beautiful landscape of Huangshan.

Huangshan Mountain is characterized by its "5 Wonders of Nature": spectacular rocks, peculiar pines, cloud sea, hot spring and winter scenery. The area is also notable for its likely history of Quaternary glaciers. A source of controversy amongst geologist, the occurrence of glaciers in Huangshan Mountain has been debated for half a century, but no final conclusion has yet been reached. This adds to the fascination of the Geopark.

There are also glacial, hydrogeologic heritages and wild plant and animal resources. All these make Huangshan a large-scale natural museum of a granitic region with mountain, water, human culture, plants and animals.

Similarly, ancient mountain roads and bridges and old stone carvings also contribute to the fantastic quality of the Geopark. These elements can be found in ‘Huangshan school’ of painting which has greatly influenced the development of Chinese landscape painting. In this way, geology shapes art and culture.

Huangshan UNESCO Global Geopark has made an education plan. In the tourist center and geopark museum, different education activities are held to communicate with the public, such as volunteer week and special exhibitions. Visitors can also get leaflets about the UNESCO Global Geopark there. Geological knowledge and tourist information are also available on our website. For the explanation, we improved our outline with content on geological evolution, culture and biodiversity. The explanation board system is designed under a common standard. With the tourism agency, we also designed several education routes for schools. The UNESCO Global Geopark also corporates with the community, universities and research institutes, like China University of Geosciences and Chinese Academy of Geological Sciences. We founded several workstations and research bases in corporation with different organizations. Research results are used for management and education. Since the establishment of Huangshan UNESCO Global Geopark in 2004, the number of local restaurant and B&B has greatly increased and the community income has risen more than 3 times.