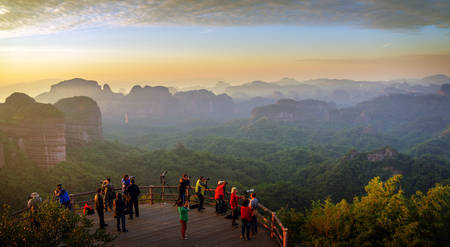 Danxiashan UNESCO Global Geopark is the Redstone Park of China. It is located in the northeast of Shaoguan City in Guangdong Province and has a total area of 290 km2, about half of it is densely covered by ‘danxia landform’. Its highest peak is Bazhai with an elevation of 619 metres. Danxiashan has long been a national park and nature reserve. It became an UNESCO Global Geopark in 2004 and a World Heritage Site in 2010.

Characterised by multi-layered red sedimentary rocks of sandstone and conglomerate, the area was formed in a basin by fluvial deposition 140-65 million years ago. Warm and wet climate enhanced oxidation in rocks and turned the colour of their sediments to red. They were later uplifted, undercut by water and accelerated by rock fall to create the present danxia landform. It is geologically significant for studying the evolution of Earth’s crust. The area bears rock outcrops of different geological periods from Sinian, Paleozoic Mesozoic to Neozoic. The Cretaceous sedimentary strata which form the present landscape are particularly important for studying dinosaur extinction, life and mammal evolution and regional stratigraphical correlation.

Danxiashan is currently at its mature stage of landform development with deposition, uplifting, weathering and erosion taking place at the same time to form the diversified shapes which is typically representing the characteristics of such kind of landform. As the naming site of danxia landform, Danxiashan has been studied for almost a century as a unique type of landform by Chinese geoscientists with the publication of over 300 academic papers. It becomes a global study centre of red beds in warm and humid regions. It is also a research centre for studying the evolution of the ‘Bio-Island Effect’ of ecological evolution, complex differentiations of vegetation and bio-system in highly isolated hills and mesas environment. The special landscape and the humid monsoon climate permit the growth of evergreen broadleaf forests, endemic plants, endangered and new species such as Danxia Viola, Danxia orchid, Danxia Firmiana and Danxia Chiritopsis.

Along with the rich geological heritage at Danxiashan UNESCO Global Geopark, this area has also the high cultural and archaeological values of being the discovery site of prehistoric human ‘Maba Man’ who lived here 129,000 years ago. The area is also the birthplace of the four thousand years old ‘Nian Yu Zhuan’ culture. Emperor Shun (2233-2184 BC) had visited the area and played the local ‘Shao Music’. He also named Danxiashan as ‘Shao Shi’. Since then, the area became a famous scenic site. Hundreds of rock carving from Tang and Sung Dynasties (1,500 to 1,000 years ago) are still very well-preserved. Added to this are the ancient villages, temples and tombs which demonstrate the interaction and harmony of human and nature.

Danxiashan Museum plays important role in popularising science. It is a National Science Education Centre, Land and Resources Science Popularization Centre and the teaching centre of Sun Yat-sen University, Shaoguan College and other universities. Nine and walking and hiking routes equipped with over 1,000 interpretive boards and signs are made available for public. Volunteers of Danxiashan are active and strong supporter in regular activities organised to promote geosciences.

Local communities are benefited through the annual reception of over three million visitors. Their engagement in the running of restaurants, motels and shops has significantly improved their livelihood and income which at the same time prepares a solid foundation for long term environmental improvement and sustainable development for the whole area.