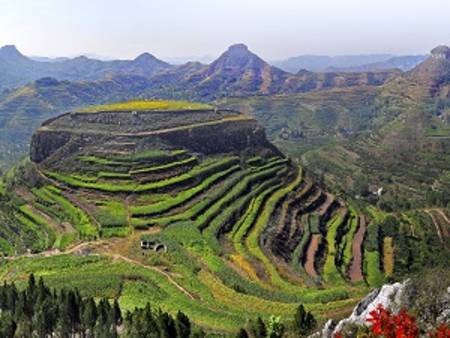 The Yimengshan UNESCO Global Geopark is located on the uplift belt on the eastern coast of China, near Jinan City, the capital of Shandong Province. It covers an area of 1,804 km2. This mountainous area is currently home to approximately 641,400 people. The west, north and south of the Geopark are hills and the central area is flat. The economy is dominated by agriculture and tourism. Throughout history, various significant geological landscapes have evolved in this area, including 5 geosites of global significance, 11 geosites of national value, 10 geosites of regional value and 18 geosites of local value.

The Geopark is located on the Luxi block west of the Tanlu fault zone. The Archean massive intrusive rock series offers researchers a glance into the record of evolution of the early crust in Northern China. For instance, the naturally occurring ‘money stone’ here is a type of porphyritic ultrabasic rock, which comes from hydrothermal alteration of ancient intrusive rocks. The site is also home to one of Asia’s largest kimberlite-type diamond mines, which were the first primary diamonds discovered in China, yielding diamonds up to 1.8 million karats. One of the stunning geophysical features of this Geopark is where the landscape is dotted with clustered, castle-shaped land formations protruding from the horizon, known as ‘Daigu’.

One of the major cities in this Geopark is Jinan, home to 8 million people. It is known as the “City of Springs” due to its extensive series of underground water systems which flow into the Daming lake. Tourists in this region can visit some of its 72 famous hot and cold springs, dozens of parks, and countless hills, like the Thousand Buddha Mountain.

This Geopark also contains multiple sites of cultural heritage, including the Zhou dynasty Wanshou Palace, the Xialou Pavillion where Confucius is said to have once visited, the 1,500 year old Marshal tree, the Manglianggu Battle Monument, and various other renowned temples. Various conservation and afforestation efforts are occurring with the support from the tourist funding. One of the main goals of the geotourism for this region is to alleviate poverty for the local populations and improve the appearance of the environment.