“The tropical bridge between Asia and Australia” 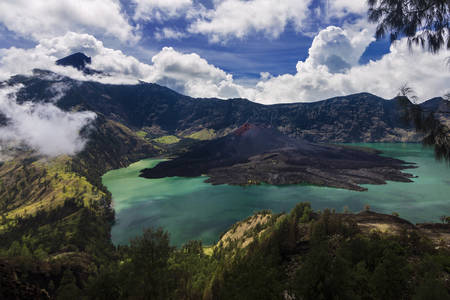 Rinjani-Lombok UNESCO Global Geopark is situated on the island of Lombok in Southeast Asia. As part of the Lesser Sunda Islands or Kepulauan Nusa Tenggara, the island is located between Bali and the Lombok Strait to the west and Sumbawa and the Alas Strait to the east. Rinjani-Lombok UNESCO Global Geopark has a rich and diverse landscape, forest types ranging from savannahs and semi deciduous forests to lower montane evergreen forests and tropical montane evergreen forests.

Quaternary calc-alkaline volcanoes, Oligo-Miocene volcanic rocks and Neogene intrusive igneous rocks dominate the island’s geology. The volcanic complex developed due to the subduction of the Indian Ocean Plate under the South East Asia Plate. The Quaternary volcanoes can be further categorized into an old and young complex. The old volcano complex consists of the Mt. Punikan and Mt. Nangi in the west and the Mt. Sembalun in the east. With a height of 3,726 m a.s.l. Mt. Rinjani presently holds the highest peak in the volcanic complex. The caldera of the Samalas Volcano, filled with a combination of meteoric and hydrothermal water, has formed a lake named Segara Anak. In the middle of the caldera emerges a young volcanic cone, Mt. Rombongan and Mt. Barujari. The youngest volcanic complex, Mt. Rinjani, was formed approximately 12,000 to 6,000 years ago. Two volcanic cones existed prior to the eruption of the Samalas or Old Rinjani volcano in the 13th century, the Samalas Volcano and Mt. Rinjani. The eruption of Samalas in 1257 resulted in the formation of a huge caldera and pyroclastic flow in Kokok Putik and caused the collapse of part of Old Rinjani. This eruption changed the entire landscape, buried the old civilization and created a stage for the beginning of a new culture era.

In 2009, Lombok had about 3,142,195 inhabitants. The area of the Geopark encompasses five districts (Lombok Utara, Lombok Timur, Lombok Barat, Lombok Tengah and Mataram City). The main languages spoken by local people include not only Bahasa Indonesia but also the Sasak language. Within Lombok, the Sasak language has four different dialects. About 80% of Lombok’s inhabitants are part of the Sasak ethnic group, close to the Balinese ethnic group and are mostly Muslim while the remaining 20% of inhabitants are Balinese, Javanese and Arabian people.

Hinduism, Buddhism, and Islam have influenced the history of the Sasak people in Lombok. The Sasak society is multi-ethnic and multicultural and is an acculturative portrayal of a culture. The acculturation process can be seen in the cultural heritage of Lombok shown in temples or old traditional mosques. Tools from the Paleolithic era such as stone axes used for cutting and farming or findings in the Piring Mountain related to the Shan Huyn Kalanny were also found in the area. Among the findings are a fully preserved pot, human bones, remnants of shells, charcoal and fragments of metal and animal. Other archaeological findings include the Buddha Awalokiteswara statue, nekara, and a tombstone with Chinese and Arabic letters. Pre-historic ancestral settlements of the Sasak people occupied both coastal and inland territories.

Several traditional rites were passed on through generations and still exist today including the traditional wedding ceremony known as Nyongkolanis and the traditional battle performed by so-called Pepadu (fighters) using sticks (rattan) and shields made from animal skin (ende). Wayang Sasak is a traditional puppet-shadow play and the way it is performed is unique to the island and linked to Sunan Prapen who introduced Islam and Wayang to Lombok.