“Although all Gunung Sewu beaches have a common geological formation, they each have their own characteristics” 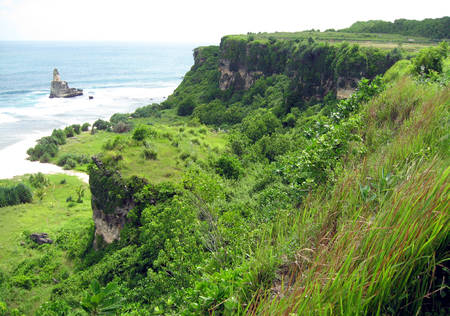 Located in the Southern Mountains of East Java, Gunung Sewu UNESCO Global Geopark extends east-west along 120 kilometres. A depression zone occupied by Merapi and Lawu active volcanoes limits its northern part, while the south is bordered by the Indian Ocean. The area, at an altitude between 5 m and 700 m asl, has mountain ranges of Upper Paleogene rocks and thousands of younger limestone hills.

Gunung Sewu UNESCO Global Geopark is a classic tropical karst landscape in the south central part of Java Island well-known in the world, and dominated by limestone. The limestone is of Neogene age and consists of calcareous-tuffaceous clastic facies (Oyo and Kepek formations) as well as reef facies (Wonosari formation). Late Oligocene to Early Miocene rocks of volcanic-origin clastic, volcanic and marine sediments underlie these limestones. Quaternary river and lake deposits represent the youngest units. There is still tectonic activity in the region because Gunung Sewu is located in front of an active subduction zone between the Indian Ocean, Australian and Eurasian plates. Active uplifting is taking place since 1.8 million years and produces very visible river terraces at Sadeng dry-valley as well as coastal terraces along the southern coast of the UNESCO Global Geopark.

In addition to its aesthetic and recreational values, Gunung Sewu is, rich in biodiversity, archaeology, history and cultural aspects. Pacitanian stone-culture represents Paleolithic to Neolithic artifacts in Southeast Asia. Approximately 1,802 km2 of the area contain traces of prehistoric settlements. Some of the prehistoric people lived in caves, while others lived in open space.

Educational programmes are part of "School to Geopark" and "Geopark to School" activities. Accompanied by geography and biology teachers, students visit geosites and are invited to discover and recognize nature around their homes. The interconnection among geology, biology and culture that form the identity of the region is also disseminated by the UNESCO Global Geopark at schools. Indonesia Karst Museum and Gunung Sewu Etalase are also places of shared learning.

Protection and preservation of the Earth’s heritage become a shared responsibility between the Regency Government and Travel Awareness Group who manage the sites and develop them into objects of interest and tourist attractions. At national level, the diversity of karst landscapes, rocks, fossils as well as geological processes are protected by Government Regulation since 2008 in the form of Geological Reserve Area (GRA).