“It is a land-born, highly volcanic counterpart of the Mid-Atlantic Spreading Ridge” 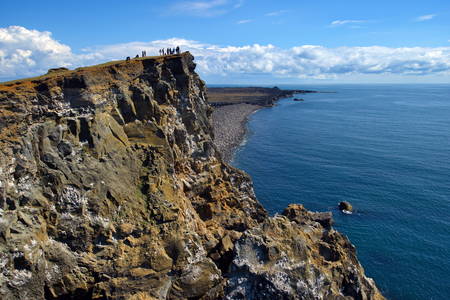 Reykjanes UNESCO Global Geopark is located in SW-Iceland, close to the capital area and has a total administrative area of 825 km2 which is 0,85% of Iceland. The area is a peninsula which offers a variety of landscapes, including fissures, lava fields and geothermal activity. Large parts of the lowland are covered by extensive lava fields allowing little vegetation. The lava is mostly covered with moss which doesn’t require much soil. The area is relatively flat with the highest point being 391 meters. The lava fields contain many cracks and fissures both below and at the surface.

The Reykjanes Peninsula is a young section of Iceland. It is a land-born, volcanic counterpart of the North Atlantic Ridge where two tectonic plates are spreading apart at an average rate of 2.5 cm/yr. The peninsula contains late Quaternary volcanic palagonite tuff and pillow lava formations as fells and mountains from the last glacial periods. Also widespread basaltic lava flows and volcanic structures from interglacial periods, especially from the last 11,500 years (the Holocene). Four elongated volcanic systems and fissure swarms line the peninsula from SW to NE. They contain open fissures, normal faults, high-temperature geothermal fields and numerous volcanic fissures. These are lined with various, monogenetic craters. Many small and large lava shields are found in the area, some made of primitive mantle melt (picrite). Eruptions have occurred in the three westernmost systems during the past millennium, all in all three series, in the 10/11th centuries, in 1151-1180 and 1210-1240.

The UNESCO Global Geopark covers five municipalities (Grindavík, Reykjanesbær, Sandgerðisbær, Sveitarfélagið Garður and Sveitarfélagið Vogar). Within the park limit there are five smaller towns and fishing villages with a total of about 22.000 inhabitants. About 99% of the population lives in towns and villages.

The Reykjanes UNESCO Global Geopark has a strong relationship with all educational institutions located within the park, with all of them being an active partner or taking part in the UNESCO Global Geopark, either directly through the municipalities or indirectly through cooperation. Reykjanes UNESCO Global Geopark will create educational material for all school levels. Its main activities support and promote geotourism in the area; promote effective co-operation between independent partners, local governments and international partners; make inhabitants and guests become aware of the UNESCO Global Geopark and its main policy; engage with local communities and stimulate sustainable development through the use of the geological heritage; co-ordinate, organize and develop activities to promote tourism e.g. in the areas of education, training, publication, consulting, intervention and provision; preserve of nature for tourism development; and raise funds for projects and operational costs.