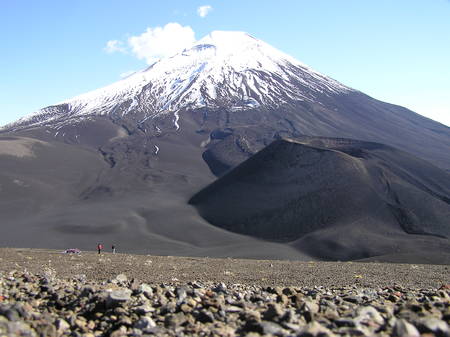 The Kütralkura UNESCO Global Geopark is situated 700 km south of Santiago, and 15 km east of Temuco, along the border of the Republic of Argentina. The Geopark covers an area of 8,053 km2 and has a total estimated population of 55,326 inhabitants. The site includes four main urban centres: Curacautín, Vilcún, Lonquimay, and Melipeuco and several Mapuche-Pewenche indigenous communities. Slightly over half of the population live in rural zones.

The geological history of this region dates back 200 million years. Its intense volcanic-tectonic activity is caused by the Nazca plate subduction beneath the South American plate, which is constantly uplifting the Andes Mountains. This site is within the Southern Volcanic Zone, where there are more than 50 active volcanoes. Four of these active volcanoes are located inside the area of the geopark: Llaima (3,179 m), Lonquimay (2,865 m), Tolhuaca (2,806 m) and Nevados de Sollipulli (2,282 m), as well as an extinct volcano, Sierra Nevada (2,554 m). Llaima volcano, in particular, is one of the most active in the country. Lliama, together with the Villarrica volcano, have produced more than half of Chile’s historical eruptions since the 16th century. Llaima has produced eight major eruptions in the last 450 years, the last of which occurred in 1994. Indeed, its 1640 eruption is believed to have temporarily halted the Arauco war between the Spanish and Mapuche. There has been ongoing, intermittent periods of lava flows, ash plumes, tephra and steam ejections, seismic activity, and a cone formation since 2008. Lonquimay is Chile’s 4th most active volcano; its most recent eruption began on 25 December 1988, lasting 13 months, and built up a new cone which nicknamed “Navidad”. This eruption (VEI 3) produced 10.2 km of andesite lava and caused extensive damage to local surroundings due to fluorine-bearing ash.

The area is also shaped by the presence of large ice masses that once covered the land, reaching maximal thickness about 20,000 years ago. The most important bodies of water in this site are lakes Galletue and Icalma, of glacial origin, and the main tributaries of the Biobío, Cautín and Allipen rivers, born within the Geopark limits. The site’s ecosystems includes forests, wetlands, high Andean prairies, scoria fields and areas of high, barren peaks. The average annual rainfall is 1,550 mm, while the averages of the minimum and maximum temperatures are -18 °C and 39 °C, respectively. This territory is also part of the UNESCO Araucarias Biosphere Reserve. A large variety of species like the Pudu deer and the Monito del monte opossum live in the dense woodlands of this area.

This area is inhabited by the Mapuches-Pehuenches communities, who have their own worldview where they highlight the divine character of the volcanoes and the knowledge related to the use of medicinal plants.

The Kütralkura Geopark is expected to improve the quality of life of its inhabitants, contribute to education and research of the Earth sciences at the local, regional and national levels, and inspire the establishment of future Geoparks in Chile. In this territory, active volcanoes are a popular tourist attraction, and it is therefore imperative that the local communities and visitors are well informed about the associated dangers and emergency procedures for possible eruptions.