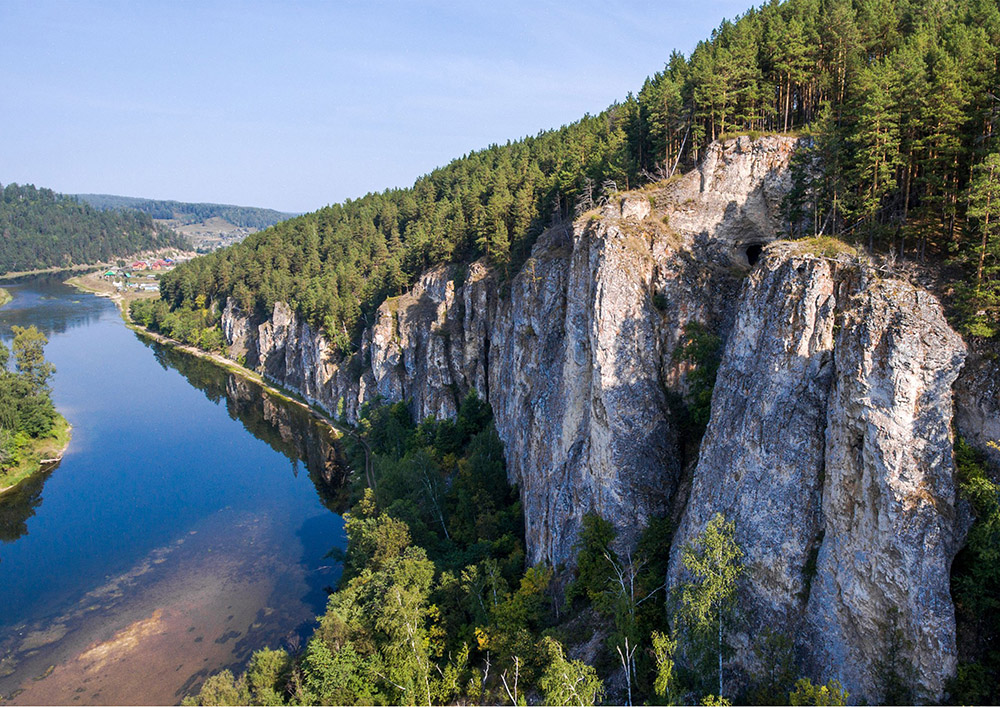 The “Yangan-Tau” Geopark is situated in the Salavat District of the Republic of Bashkortostan (Russia), which includes 16 rural settlements with 60 villages. The geopark territory is located between 54°56' – 55°31'N and 57°28' – 58°38'E, total area is 1774 km2. The district is 183 km away from the capital of Bashkortostan – Ufa, it shares the border with the Chelyabinsk Region. The road density is 71.7 km/thousand km2. The resident population of Salavat District as of January 1, 2017, was 24 216, that is 0.6% of the population of Bashkortostan. The economy is represented mainly by farming production, mining and processing industries. There are deposits of bauxite, limestone, sand-gravel mixture, cement clays, and silica sand. Agriculture specializes in the cultivation of winter rye, spring wheat, oats, barley, potatoes, meat and dairy cattle raising, breeding of horses and pigs. The principal contributor to the economy of the district and the quality of life and welfare of local communities is the “Yangan-Tau” Resort.
The relief of the area is a hillocky plain, to the east and south elevated up to about 400-450 m and with rugged topography; to the west and north leveled and lowering to about 190-300 m. Hills and ridges are meridionally oriented along the strike of the main tectonic structures. Soil is mostly chernozemic, formed over strongly calcareous sandstones. Climate is continental, moderately warm; the average temperature in January is -15.4 °C and +17.8 °C in July. The main rivers are Yuruzan and Ai. Due to the irregular terrain and the presence of karst, the river network is unevenly distributed. The flora is mixed – boreal-nemoral-steppe. The fauna is composed mainly of forest inhabitants

There are three major geological structures within territory of the “Yangan-Tau” Geopark: the East European Platform, the Uralian Foredeep and the Ural Mountains (western slope), which defines high geological diversity of the area with various forms of relief and types of landscape.
Rocks of Riphean, Vendian (Ediacaran), Devonian, Carboniferous, Permian and Cenozoic age are exposed at the territory. Well-exposed Devonian, Carboniferous and Permian sections have potential for becoming international stratotypes.
The central object of the geopark is the Mechetlino section – candidate for the Kungurian stage of the Permian system Global Boundary Stratotype Section and Point. It contains fossils including conodonts, foraminifers, ammonoids, ostracodes, brachiopods, fishes, crinoids, trilobites, calamites and calcareous algae. This territory also includes the type sections of the Bashkirian Stage of the Carboniferous system: Bolshaya Luka, Lakly and Yakhino, which contains fossil algae, foraminifers, conodonts, ostracodes and brachiopods.
Another outstanding geological object is the Yangantau Mountain (“Burning Mountain” in translation from Bashkir) with its unique thermal anomalies (highest temperature recorded is 380 °C at the depth of 90 m) and no magmatic activity. It is both an object of geological and medical significance and use – steams and gases are widely applied for balneological treatment. It is included in the Global Register of the Earth's Geological Heritage as part of the ProGEO program.
There are lowland peat-bogs, karst caves, the Kurgazak spring (flow rate is 100-125 l/s) and the Kuselyarovo sulfur springs on the territory of the “Yangan-Tau” Geopark, all of them are natural monuments of the Republic of Bashkortostan.