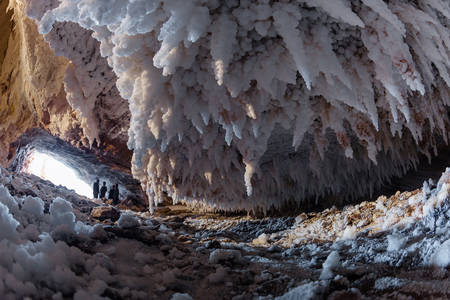 Qeshm Island UNESCO Global Geopark is an island of the Islamic Republic of Iran, which has the shape of a dolphin. It is the largest island of the Persian Gulf region and stands parallel to the south coasts of the Hormuz Strait. The highest point on the island, Kish Kuh Mount, is 397 m high.

Qeshm Island UNESCO Global Geopark is part of the huge mountain range of Zagros, which has been deformed and folded as the result of the last phase of the Alpine orogeny in the Plio-Pleistocene. The geological formations of this mountain belt belong to the Late Precambrian to Cambrian (more than 480 million years old) and include salt diapirs attributed to the Precambrian period called Hormoz Series. According to the majority of geologists, the tectonics of this region has been active from the Late Tertiary. The tectonic zone is represented by the south part of the deformed forehead or the convergent belt (Mesopotamia and Persian Gulf region), as well as by the margins of the compression and collision plates of the Iranian-Arabic continent.

The Qeshm Area of the Persian Gulf Region forms part of the south and eastern extreme foreland of the Zagros geological and structural Province, expressed in the NW-SE trending Zagros Mountain ranges. The more southerly part of the Zagros Fold Belt faces, but is separated from the Oman Region, while the Mokran geological and structural Province lies to the east, beyond the Minab-Oman fracture zone. The highest mountain peak on Qeshm Island is related to the Kish Kuh Anticline structures that have increased the height in part as an effect of diapirism tectonics, related to the Namakdan Salt Plug. Qeshm Island UNESCO Global Geopark has also the world longest salt cave, 6600 m in length. In addition to the salt formation and complex, other sedimentary formations are exposed in the different anticline structures on the island. The succession consists of conformable Neogene (Mio-Pliocene) units, with a total thickness of about 1200 to 1850 meters from the eastern to western ends of this island, respectively. In general, mountainous or high ranges nearly coincide with the folds having anticline structure, or in part as salt dome diapers, and the relative lowlands are mainly within or based on intermediate forms or synclines. Several major geosites are also located around the anticlines.

The island has abundant wildlife, including birds, reptiles, dolphins and turtles. In Qeshm Island, zoogeographical areas of Palearctic and Oriental, and phytogeographical areas of Afro-tropical, Oriental and Eurasian, are meeting each other, which generated a huge variety in fauna and flora.

Qeshm Island UNESCO Global Geopark has three cities and 57 villages. There are about 120,000 people residing on Qeshm Island. The major business opportunities of the people are trading and fishing. Local communities are now also engaged in geotourism activities and profit from the benefits of this sustainable and environment-friendly business, which provides a real motivation for the local community to conserve the geosites.

The culture of Qeshm is based on its intact nature and geological heritage. The oldest human settlement in the Qeshm Island UNESCO Global Geopark is about 40,000 year old. According to archaeological analysis, the island inhabitants were famous traders in ancient Persia, especially during the Sassanid era, with the Far East, the west coast of the Indian subcontinent, the southern shores of the Persian Gulf and especially the east coast of Africa. This trade continued during the Islamic periods. According to anthropological observations, some cultural traces, clothing or music, observed on the island, have their roots in African and Indian cultures. Qeshm is also a supposed site of the Garden of Eden according to Cassell’s Bible.

In some of its geosites, Qeshm Island UNESCO Global Geopark has established an educational programme for the local community aimed at conserving these natural zones. An example is the educational visiting center built in the tourist-jetty of Soheili village, lying on the southern coast near the Hara Biosphere Reserve. The Qeshm Island UNESCO Global Geopark also produced a specific educational programme based on the framework of schools’ science textbooks. It persuades students to learn about the Earth, stimulates their sense of responsibility about the Earth’s resources and encourages them to do teamwork. The educational-promotional programme encourages students to care about the environment. There is a special programme dedicated to kids aged 7 to 11 that aims to leave a durable and happy impression about taking care of the Earth.