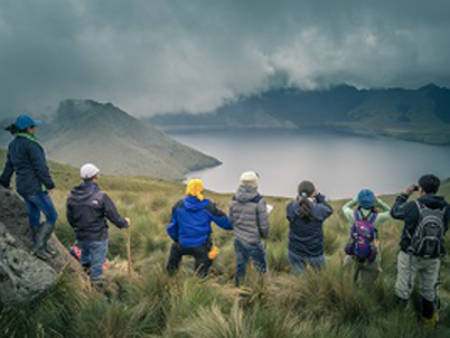 The Imbabura UNESCO Global Geopark is located in South America, in the inter-Andean region of the Republic of Ecuador. This space is characterized by volcanic complexes, lakes, waterfalls, geological faults, mines, archeological remains, and cultural heritage. The site covers an area of 4619.03km2. The highest peak is the Cotacachi Volcano, at 4939 metres above sea level, and the lowest point is the Guayllabamba River basin, at 600 metres above sea level.

According to the Geophysical Institute of the National Polytechnic School, the Imbabura, Chachimbiro and Cuicocha volcanoes are potentially active, whereas, the volcanoes Pilavo, Parulo, Yanahurcu de Piñan, Pulumbura, Cotacachi, Cubilche, Cushnirumi, Cusin, Fuya-Fuya and Mojanda are considered to be dormant or extinct. All of the volcanoes in this geopark are being constantly monitored in case of potential activity.

The hydrothermal systems within these volcanic complexes are also important part of the regional economy. Explorative drilling in Chachimbiro has reached a depth of 2000 metres, capturing temperatures above 200 ° C, which is ideal for the extraction of geothermal energy. These resources harness the natural heat of volcanic systems, which can then be exploited as a renewable energy resource. The hot springs are also popular for tourist activities.

Imbabura is inhabited by approximately 428,300 people. The main city, San Miguel de Ibarra, is at the foot of the Imbabura Volcano, on the left bank of the Tahuando River. It is known as the ‘white city’ for its colonial white-painted houses.

The cultural heritage of the region can be traced back to the prehistoric era, and is currently inhabited by the Caranqui people, including ethnic groups of the Otavalos, Zuletas, Natabuelas plus the Afro-Ecuadorian people, Montuvio, the Awa, and all the diverse locals. These groups are renowned for their unique traditions and artisan expressions.

Mining in this region provides materials for cement and construction projects. Sustainable development efforts have focused on the responsible extraction of copper and gold – among other purchased minerals – in order to protect populations and ecosystems.