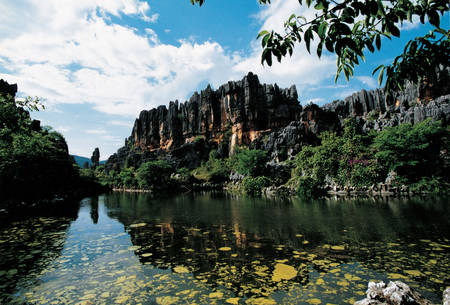 Shilin UNESCO Global Geopark is named because of the tall and pillar-like limestone scattered and distributed on this area. That makes it renowned in the field of geoscience and tourism. Shilin represents a unique topography and natural geographic feature on earth, it also displays a unique landscape aesthetic. It was hailed as a "wonder of the world." The geological relics of Shilin presented the most diverse forms of karst, the tall pillar-like limestone, sword-shaped limestone, mushroom-shaped limestone and tower-like limestone are represented in Shilin UNESCO Global Geopark. It’s also the origin of the words “Stone Forest” because it’s the typical example to reflect the evolution and development of the karst topography geologic relics, which has the features of historic, multi-stage, rarity and diversity of landscape forms.

Shilin UNESCO Global Geopark is the representative area which reflect the regional geological evolution since the late Paleozoic in the form of the stone forest landform. The rocks and stones which are exposed in the strata are mainly Devonian, Carboniferous, Permian carbonate rocks in a shallow water platform. The area was long ago covered by an ancient sea that deposited thousands of meters of calciferous shells that would one day become limestone and dolomite. This deep layer was later uplifted and weathered to become the stone forest. This karst process yields fantastic, sharp stones that are edged like a knife, and also rounded, mushroom-like stones. Clusters of stone pillars 20-50 meters high appear like a forest on the horizon. These formations have very high scientific and aesthetic values.

The indigenous Sani People of Yi have lived in the Shilin UNESCO Global Geopark for more than 2,000 years and are closely bound to the karst landscape. Their widely loved epic Ashima and a suite of other cherished cultural elements have spread across China. The rich culture combines with the stone forest in a harmony that celebrates geoheritage.

Through tourism activities, Shilin UNESCO Global Geopark introduces visitors to the basics of karst science so people will understand and know the evolutionary history of this planet where we live. Also it will let people know the real meaning of the beautiful landscape and the spectacular geological features in order to improve the tourism quality and the consciousness of protecting the natural environment.

The legislative institution of the local government, Yunnan Province particularly legislated the "Stone Forest Scenic Spot Protection Ordinance" for Shilin UNESCO Global Geopark in order to protect the environment of Stone Forest. The Shilin UNESCO Global Geopark Administration was established as the management to ensure the objective of protecting the Stone Forest is achieved. Tickets proceeds are mainly used for protecting the geological heritage, repairing the damaged ecological environment, developing the villages and communities in the park and improving people’s living condition in this area. These measures fully reflect the development, protection and restoration of nature, and realize the value of science and education, social economy, ecology and aesthetics, and also ensure the sustainable development of Shilin UNESCO Global Geopark.