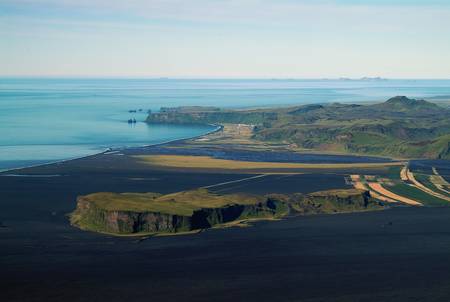 Katla UNESCO Global Geopark is in central South Iceland, reaching from the south coast with its black beaches into the highlands in the north with the majestic glaciers. The area stretches from the town Hvolsvöllur in the western most part of the UNESCO Global Geopark to the glacier Skeiðarárjökull (part of Europes largest glcier Vatnajökull) in the eastern part.

Katla UNESCO Global Geopark is situated on the Eastern Volcanic Zone (EVZ), one of the most volcanic active areas in Iceland representing high geological diversity of great geological heritage value. The Katla UNESCO Global Geopark is named after the volcano Katla that has for centuries had great impact on Icelandic nature and people living in the area. Katla is one of the largest central volcanoes in Iceland, covered by the glacier Mýrdalsjökull. The volcanic activity of Eyjafjallajökull, Katla, Grímsvötn, Lakagígar and Eldgjá and its widespread effect on the landscape in the area provide the geological basis for the Geopark.

The region is characterized by central volcanoes fuelled by the Iceland mantle plume and evidence of the active rift zone of the North Atlantic Rift with SW-NE trending eruption craters, fissures and hyaloclastite ridges. In addition ice-capped volcanoes and tuff mountains, vast lava flows, sandur plains with their black beaches and pseudo craters (rootles vents formed by lava flowing into wetland) are prominent features in the landscape along with majestic waterfalls and islands protruding from the sandplains of the lowland. Glaciers are prominent in the landscape covering the highest mountains, and volcanoes in the area, with subsequent glacial formations: outlets, moraines and ice-dammed lakes, glacial rivers and outburst floods generally associated with subglacial geothermal areas or subglacial eruptions forming outwash plains. Part of Vatnajökull National Park is within the boundaries of Katla UNESCO Global Geopark including Laki, Eldgjá and the spectacular Langisjór lake.

Located on the south coast of Iceland, Katla UNESCO Global Geopark covers three municipalities with a combined population of about 2,700 people. The boundaries of Katla UNESCO Global Geopark are the same as the boundaries of the three municipalities within the area of the park, namely: Skaftárhreppur in the east, Mýrdalshreppur in the centre and Rangárþing eystra in the west.

Traditionally agriculture has been the main economic activity but recently tourism has increased considerably. In the area there are several heritage centers including the Saga Center in Hvolsvöllur, Skógar museum, Katla center in Vík and Skaftárstofa in Kirkjubæjarklaustur as well as local initiative Eyjafjallajökull erupts – center of Thorvaldseyri farm.

Over 40 information panels have been made and positioned at 24 geosites, along with improved hiking trails and sign systems. Educational trails have been formed and enhanced with a number of educational panels. Three hiking maps of the area have been developed and are sold within Katla UNESCO Global Geopark. Numerous courses have been run by Katla UNESCO Global Geopark including courses on local guiding, local innovative food products and other courses emphasizing sustainable development of the area. The area is now a popular tourist destination, especially for foreign tourists, and initial efforts to increase whole year employment within the tourism industry by developing the Geopark concept have already been quite successful. Katla UNESCO Global Geopark has also been influential in encouraging product development of local produce. The latest initiative is the funding of Geo Schools, where Katla UNESCO Global Geopark and the three local primary schools have teamed up to enhance and offer exceptional geo-education to the youngest inhabitants of the area as well as enhancing the outdoor teaching skills and education material of the teachers.