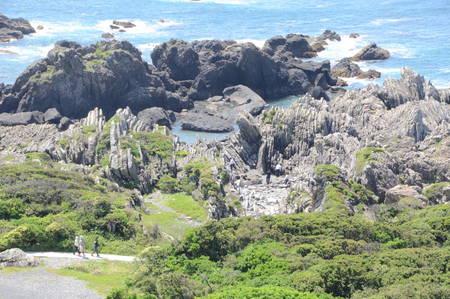 Muroto UNESCO Global Geopark is located in the southwestern part of the Japanese archipelago, on Shikoku Island. It includes all of Muroto City, Kochi Prefecture. Mountainous areas cover 87% of Muroto, and the mountain range at the northern margin of Muroto is approximately 1000 m high. Plain areas for daily life and economic activities only account for 13% of the area. Muroto is also notorious for being subject to frequent typhoons which occur in the Philippine Sea. The typhoons often cause serious damage with heavy rain and wind in summer and autumn.

“Muro” means “a residential cave in a mountain slope,” and “to” means “entrance of the house,” or “door.” In ancient times, Muroto was under the sea. The caves formed underwater and were later uplifted by successive earthquakes. At the Nankai Trough, 140 km off Cape Muroto, the Philippine Sea Plate is subducting beneath the Eurasian Plate. Muroto UNESCO Global Geopark is underlain by an accretionary complex of Late Paleogene to Early Neogene formed at the plate boundary between the Eurasian Plate and the Philippine Sea Plate. The sediments of the Nankai Trough are attached to the continental plate to form a mass of built-up sedimentary rock, called an accretionary complex, part of which is exposed on Cape Muroto for visitors to see and touch. The subduction process also caused a gabbroic magma intrusion and weak metamorphism in the sandstone/mudstone layers. The wedge-shaped cape of Muroto was formed by the oceanic plate subduction and uplift of land. The Shikoku Island is also affected by an east-west compression, triggering uplifting of the Cape Muroto and Cape Ashizuri and subsidence of Tosa Bay.

Cape Muroto is being uplifted by 1 to 2 m per 1000 years, which is among the world’s top-class uplift rates. Marine terraces have developed near the coastline, with terrace plains on top at 180 m above present sea level, which formed at the Last Interglacial period, 125,000 years ago. The tectonic situation still causes earthquakes accompanied with tsunamis at an interval of 100 to 150 years. Visitors can also see the evidence of events on a human timescale, including microtopography resulting from earthquake uplifts at roughly 100 year intervals, and the remains of submarine organisms pushed up above sea level.

Muroto UNESCO Global Geopark is conserved as a Quasi National Park and widely used for education and research activities. In Muroto UNESCO Global Geopark, visiting tourists and students can understand the land formation process from a scenic road and lookout points on the marine terrace slopes. Besides the obvious natural phenomena, the Geopark helps to demonstrate the danger of large earthquakes and tsunamis and shows the methods of prediction and protection using state-of-the-art science and technology. Marine terraces in the Muroto Peninsula, included in university and high school textbooks, can be considered as the best example of marine terraces in Japan.

All activities are conducted based on the concept of “sustainable development,” by utilizing the natural environment to improve our quality of life without compromising the ability of future generations to meet their own needs. Various people including teachers, community members, researchers, and foreign people are involved in the field of education. The coastal areas of the UNESCO Global Geopark belong to the Muroto-Anan Kaigan Quasi National Park since 1964 and are protected by the Natural Parks Law and other acts and local ordinances. Urban development is strictly regulated in the coastal areas. The Basic Environmental Plan (Muroto City) sets the policies of environmental protection through collaborative efforts of the government and private sectors. Periodic patrols and beach clean-up events have been conducted within the area. We also make further efforts to raise awareness towards geoconservation through pamphlets, signboards and geotourism.