“The oldest rocks at Wangwushan-Daimeishan are more than 2.5 billion years old” 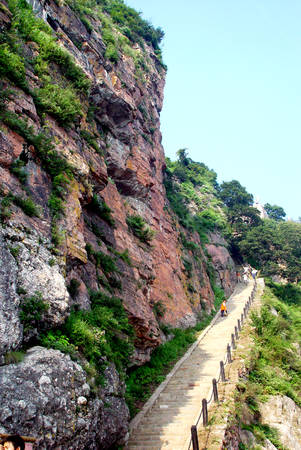 Wangwushan-Daimeishan UNESCO Global Geopark is located in Henan Province, China It consists of seven scenic sites and is subdivided into three areas on the basis of geomorphology: Wangwu Mountain, Daimei Mountain and the Yellow River Valley. The Geopark lies on the southern margin of the North China Block and has an abundant geologic record.

A complete set of the geo-historical record from Neoarchean to Cenozoic is conserved in the Wangwushan-Daimeishan UNESCO Global Geopark, where records of the evolution history of North China craton is clearly displayed, making it the ideal place to research the geological evolution of North China, even worldwide. The Linshanyan group of Neoarchean, the oldest formation in the region, has a history of more than 2.5 billion years old. Strata from different periods developed in sequence from Proterozoic, Paleozoic, Mesozoic and Cenozoic are overlaid, spanning a period of more than 50 million years. A lot of plant, animal and trace fossils were preserved in these deposits. The geological records of Neotectonic movements associated with the evolution of the Yellow River, the geological records reflecting the evolution of eastern China in Mesozoic, and the group of geological time reflecting the history of the aggregation and fragmentation of the Columbia supercontinent in the early time of the Earth have an important significance on researching the geological history of the whole North China, even the world.

The long geological history of Wangwu Mountain created not only a beautiful natural landscape but more than 20 kinds of mineral resources such as coal, iron, and aluminum. At Daimei Mountain, odd stones are prized by collectors as treasure. The area’s ecology is similarly rich; 1,200 species of plants comprise an established seed bank. Many large Gingko trees are over 2,000 years old. These trees are the source of many legends. In the deep forest of Wangwu Mountain, more than 3,000 macaques comprise the world’s most northern population of macaques.

Since the establishment of the UNESCO Global Geopark, the Geopark compiled the 20-year comprehensive plan and the plan of science education, they have enacted regulations for Wangwushan-Daimeishan UNESCO Global Geopark and the rules of geoconservation. They have trained a team on management, construction, technology and service through the technical power of Henan Institute of Geological Survey. They participated in more than 20 national and international geological meetings. They undertook the Mesozoic project of paleontological fossils. They have built the science education center and signed cooperation agreements on scientific research and popularization of science with several universities and research institutes. They have settled 193 boundary markers and tablets, and 4 routes for science education, 124 big billboards, 183 interpretive panels, 160 service signs, and they have compiled 5 popular science readings and five kinds of poster foldouts amongst other products and videos for scientific propaganda. They carry out activities as lectures, popular science exhibition, popular science in the communities and schools by annually celebrating Earth Day and popular science propaganda week. The geological museum has free entry and receives 200,000 tourists every year. A new tourist trail surrounds the ancient capital of Luoyang and the adjacent reservoir and brings visitors up close to the region’s geology and history.