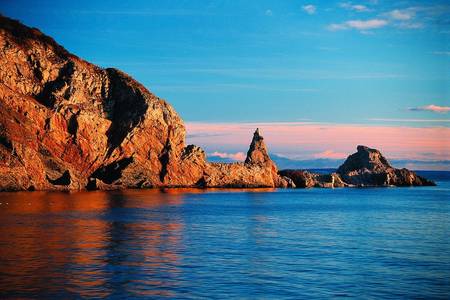 The English Riviera UNESCO Global Geopark is situated within the stunning, rolling hills on the south coast of Devon, southern England.

Unique in Western Europe, the English Riviera UNESCO Global Geopark is geologically renowned for its 350-400 million year old Marine Devonian limestones of great historical importance. The rich faunas yielded by these rocks were used, in part, to characterize the original Devonian System of the pioneering geologists Sedgwick and Murchison which was named after Devon the county within which the Geopark is situated. In addition, excellent exposures of classic desert sandstone and breccia in the 300-250 million years old Permian "Red Bed" sequences are recorded. The limestones themselves also include important Quaternary karstic features such as Kents Cavern. Pengelly's excavations of the caves in the nineteenth century influenced public opinion worldwide as to the antiquity of man.

Encompassing the entire area of Torbay, including the three towns of Torquay, Paignton and Brixham the boundary of the UNESCO Global Geopark follows that of Torbay Council Unitary boundary, covering 62.4 km2 land and 41.5 km2 marine area. With a population of 138,000 residents the terrestrial area is mainly urban or sub-urban however the beautiful coastline, which fundamentally links the rich diversity of landscape with wildlife, people and culture has lead to the development of tourism being the dominant industry. The area has also influenced the work of Agatha Christie, the famous crime writer who was born in Torquay.

A network of Visitor Centres celebrate the links between the geological heritage and all other aspects of the area’s natural, cultural heritage from the rare limestone grasslands, bird colony and Napoleonic Forts at Berry Head to the history of early man at Kents Cavern. Educational activities and events are run all year by a range of UNESCO Global Geopark partners including amongst others Kents Cavern, Torbay Coast and Countryside Trust, and the museums in Brixham and Torquay. In addition, educational enquiries, based on the geological stories of the Geopark have been developed with resources and materials for teachers, for Key Stages 1(age 5 to7), 2 (age 7 to 11) and 3 (age 11 -14). The Geopark also features within the new Collins Key Stage 3 National Curriculum text book on Geographical Enquiries. The Paignton Geoplay Park provides fun for families whilst for the more adventurous new company Geopark Adventures runs the Geopark Multi-Sport Event Series and Geopark Partner Reach Outdoors runs outdoor adventure activities.