“Amazing geology, mining heritage and landscape, together with millennia of human presence” 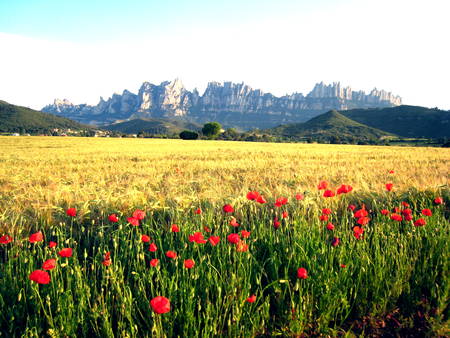 The Central Catalonia UNESCO Global Geopark, located in the heart of Catalonia, contains numerous geological and mining heritage sites, as well a strong human presence, which has given this territory a strong personality, with a great culture and traditions.

Over 36 million years ago, across much of Catalonia, there was a sea which disappeared and evaporated with the rise of the Pyrenees. This process left spectacular rock formations and rich natural resources, which defined the landscape and the society of the territory of the Central Catalonia UNESCO Global Geopark. Rocks are essentially sedimentary and from Eocene and early Oligocene ages and were deposited first in marine environments and after being isolated from the sea (about 37 million years ago), with fluvio‐lacustrine sediments. The Catalan Potassic Basin, the end of the marine basin, is an example of world relevance of the sedimentation of marine evaporitic rocks, with minerals such as halite (common salt) and sylvite (potash), formed 37 million years ago in the tectonic context of the rising of the Pyrenees. Furthermore, the territory also has unique elements internationally recognized such as the mountains of Montserrat and Sant Llorenç del Munt (ancient littoral fan deltas). Others are karstic elements such as Saltpetre Caves and El Toll Caves, the latter with important prehistoric and faunistic and human remains. The most southerly manifestations of the Pyrenean tectonics, is apparent in a representative geomorphology and important findings of Quaternary terrestrial vertebrate fossils in the fluvial terraces, among others.

The UNESCO Global Geopark includes 30 municipalities from the Bages county, 5 from de Moianès county at the east, and one municipality belonging to Baix Llobregat county bordering from the south. The population is around 188.000 inhabitants, with a density of ca. 140 inhabitants per km2 (2009 census).

The Central Catalonia UNESCO Global Geopark has peculiarities such as the Toll and Saltpeter caves, Montserrat and Sant Llorenç de Munt, two Nature Parks with an identifying landscape, a geology museum that goes beyond a classical museum, in showing the use of geological materials to people as a part of the 46 sites of geological and mining interest, in a land rich in cultural and historical heritage, including medieval villages and Romanesque art. There are several interpretation and information centres in the UNESCO Global Geopark welcoming the visitors and coordinating different geo‐activities. Each one of them also carries out educational programmes related to geology and the UNESCO Global Geopark. Moreover, teachers have the support of an Educational Centre that is creating and leading activities on fostering the territory, environment and geology. The Central Catalonia UNESCO Global Geopark work with schools and universities in order to contribute in the sustainability culture and research and promotes the conservation of it geologic and mining resources.

The Central Catalonia UNESCO Global Geopark is a unifying project that highlights the geological and mining attractions of the area, as well as the tourist assets under a common denominator, geotourism, with an interesting and high quality tourist offer, integrating culture, nature, geology, mining and gastronomy. Geotourism must be understood as the activity that supports, or even improves the geological character of the territory, including its culture, environment, heritage and the well-being of its residents. The UNESCO Global Geopark takes advantage of the force of geotourism to economically and socially stimulate the whole territory for a more balanced development. Public and private initiatives are related to values of the territory and promote economic sustainability (stakeholders’ formation, local products, crafts, cuisine, branding, etc.). The UNESCO Global Geopark fosters research, and also fosters awareness of the values of local heritage (natural and cultural) and specially of the geological heritage. It further aims to reduce the loss of young rural population who used to migrate to cities. The idea of sustainable improvement allows a development based on the identifying own characteristics of the territory.