“An ocean of singing sand” 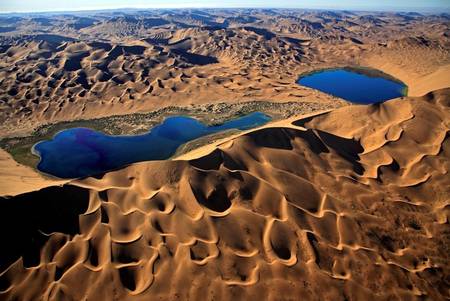 Located in the east part of the Yinshan Mountains, bounded to the north by the Inner Mongolia Hercynian fold belt, to the southeast by the Table Mountain and Helan Mountain platform subsidence, to the south by the Qilian Caledonian fold belt, Alxa Desert UNESCO Global Geopark is rich in geoheritage of great scientific value, as well as significant value in geo-education and geotourism. The most representative geoheritage in the UNESCO Global Geopark are the megadunes which are called “Mt. Everest Desert”, the widely distributed singing sand which is called “Singing Sand Kingdom” and the numerous desert lakes. The geoheritage in the UNESCO Global Geopark is quite rare throughout the world for its large size of desert, numerous quantities of desert lakes and vast area of singing sand, which makes it important in studying formation and regional environment evolution.

To better popularize science, the UNESCO Global Geopark has established a geo-museum with exhibition halls and interpretation panels for geo-regions, geo-areas and geo-sites. Geo-education has been conducted through websites, leaflets, guidebooks, popular science readings and popular science activities. The UNESCO Global Geopark has been promoted through lectures in communities, junior and secondary schools. Besides, we popularize geosciences and culture knowledge with the combination of Mt. Mandela cliff carvings and Black City cultural ruins. For sustainable development, legislative protection has been strengthened, cooperation with relevant enterprises has been done periodically and the UNESCO Global Geopark has made a plan for construction of infrastructure and interpretation system, design and production of geo-tourism souvenirs, Geopark restaurants and hotels, all of which have supported the UNESCO Global Geopark and promoted the local economic development simultaneously.