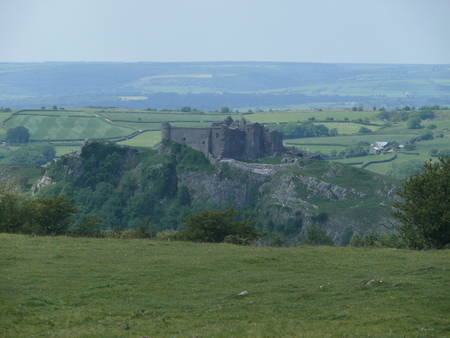 The Fforest Fawr UNESCO Global Geopark is located in South Wales, UK, in the west of the Brecon Beacons National Park. It bridges the transition from rural mid-Wales to the industrial valleys of south Wales.

The geological history spans a period of 480 million years. From Ordovician to Carboniferous times the area was located on a stable Midland Platform and sedimentation was influenced by changes in sea level in response to the latest Ordovician, early Silurian and Carboniferous ice ages. Tectonic events involving uplift in the late Silurian, Middle Devonian and late Carboniferous resulted in significant breaks in the geological record, known as unconformities, between the Late and Early Devonian Epochs and the Carboniferous and Quaternary Periods. The onset of late Silurian continental conditions was followed by the deposition of the Devonian Old Red Sandstone and the greening of the land by primitive land plants. During Carboniferous times, the area was covered by shallow tropical seas and equatorial forests associated with the formation of limestone and coal. Following a break in the geological record of approximately 305 million years, the landscape was sculpted by ice and rivers during the last 26,000 years.

The Geopark’s importance in the history of geology is ensured by the globally recognized terms Llandovery and Silurian named for a local town and the Celtic Silures tribe who inhabited the area during Roman times.

Nearly 11,000 years of human activity in the area of the Fforest Fawr UNESCO Global Geopark created a cultural landscape in which ancient monuments contrast with the legacy of 200 years of industrial activity. Quarries, limekilns, tramroads, canals, coal and silica mines reflect a period in which the Geopark’s geological resources were exploited for metal production in south Wales. Weathered and overgrown, these relicts of an industrial age are an integral part of the Geopark’s beautiful and dramatic landscape. The rich culture of the geopark’s early inhabitants comes to life in myths and legends linked to wooded valleys, caves, lakes and misty mountain tops.

The UNESCO Global Geopark provides recreational opportunities throughout the year. Visitors can obtain information, purchase maps and guides to walks and geotrails from six centres, situated mainly in local communities and enjoy a friendly reception.

From the early 20th century the geological, archaeological, industrial, cultural and intangible heritage has provided an outdoor laboratory for education and research in schools and universities. The UNESCO Global Geopark is also an important resource for the informal communication of knowledge to members of the general public and to amateur societies who utilize the UNESCO Global Geopark to deliver learning experiences to young people. Fforest Fawr UNESCO Global Geopark is deeply engaged in helping to support the local economy using the landscape and its geology as drivers for growth. It engages with local businesses by organizing workshops for the Fforest Fawr UNESCO Global Geopark Ambassadors Scheme, through Geopark orientation days and by delivering modules to the now well-established Brecon Beacons National Park Ambassador Scheme. It also engages with local communities and supports them in their search for economic value by encouraging tourism. Walks, festivals, signage and interpretation are all developed to improve visitors’ experiences. These are then reflected in websites and marketing through the Brecon Beacons Sustainable Destination Partnership.