“Azorean volcanoes are an eruption of flavours, smells and experiences!” 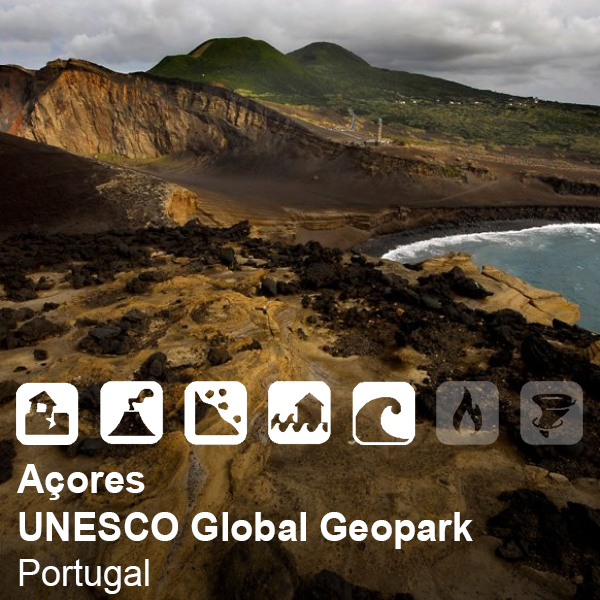 The Açores UNESCO Global Geopark is located in the North Atlantic Ocean between the European and American continents at a distance of 1,815 km from the Portugal mainland. The Global Geopark area is 12,884 km2, including the 2,324 km2 of the 9 islands territory and 10,560 km2 with 4 marine geosites of international to national relevance. The archipelago is a Portuguese autonomous region composed of nine islands, which are dispersed along a 600 km length narrow band with a WNW-ESE trend.

The Azores archipelago is located at the triple junction of the North American, Eurasian and African lithospheric plates. These oceanic volcanic islands emerge from the Azores Plateau, which is defined by the 2,000 meters bathimetric line and is roughly N-S crossed by the Mid-Atlantic Ridge. The oldest terrestrial volcanism (about 8 million years) is present on Santa Maria Island, while Pico is the youngest island of the archipelago that emerged about 300,000 years ago. There are 27 main volcanic systems, with 16 major central volcanoes (12 of them silicic and with summit subsidence calderas) and 11 volcanic ridges associated with basaltic fissure volcanism, among which 9 polygenetic volcanoes and 7 fissural ridges are active. The small insular territory has about 1,750 monogenetic volcanoes, tectonic structures, Miocene sedimentary rocks and offshore deep-sea hydrothermal fields and seamount volcanoes.

The Açores UNESCO Global Geopark includes 19 municipalities and 156 civil parishes and has a population of 246,772 inhabitants.

The Açores UNESCO Global Geopark combines the protection and promotion of its geological heritage with the sustainable development of their communities, with a socio-economic, educational, environmental and cultural focus. Environmental education and awareness activities focus on the volcanic origin of the islands, its geolandscapes and geological processes, in close cooperation with the regional network of “Ecotecas”. Several initiatives are addressed to schools, the general population and also to the visitors of the UNESCO Global Geopark, and allow through learning, exploration and discovery to reveal the secrets of GEA-Mother Earth. The balanced and sustainable economic development of the territory is ensured by the promotion and development of traditional activities and local products, namely those high-quality agro-industry sector products (e.g. cheese, meat, tea, wines), and a strong emphasis on geotourism as a holistic approach focused on valuing the volcanic nature of the territory and its footprint on the Azorean biodiversity, culture, architecture, traditions and ethnography.