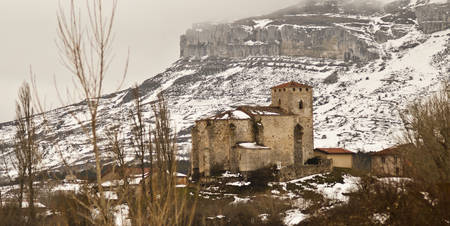 Las Loras UNESCO Global Geopark is located in Spain, in the north of the Castilla and León Autonomous Community. The UNESCO Global Geopark is halfway between the Castilian Plateau and the Cantabrian Mountain Range. This transitional location gives the region the typical weather and environmental features of the surrounding regions. It also possesses a wide range of environments and biodiversity, with both Euro-Siberian sites as well as Mediterranean sites. In addition, the unusual topography resulted in a peculiar landscape where limestone cliffs and significant high altitude moorlands alternate with gorges and deep valleys sunk by the existing river system.

The territory of the UNESCO Global Geopark is located in a prime position to improve the understanding of the stratigraphy and sedimentary evolution of the Mesozoic deposits in this sector of the Basque-Cantabrian basin. There is an almost complete record from the Late Triassic (ca. 215 million years ago) to Paleogene (ca. 60 million years ago) with exceptional outcrop conditions. The territory has an important structural interest since it is possible to reconstruct in detail the fracturing ("rift") and structures, which occurred during the Upper Jurassic-Lower Cretaceous and during the Alpine orogeny.

Paleontology and geomorphology are other highlights of the geological heritage of the territory. There are many important paleontological sites such as Upper Jurassic floral macrofossils, skeletal remains of a Camptosaurus and also important Upper Cretaceous rudiste and coral colonies.

There are many important examples of morphogenetic systems, such as karst, scattered throughout the UNESCO Global Geopark. The morphology of the area is controlled by the different hardness of the Mesozoic substrate materials, as well as by the geological structures of the sedimentary rocks layers. In this sense, the limestones and dolomites are the competent materials compared to the loams and sands, which erode more easily. This generates the development of large and deep canyons excavated by the current river network.

The Mesozoic moorlands or “Loras” are undoubtedly the geological element, which characterize the best the region’s landscape and they are also the common feature among its whole geography. The Loras are the spatial and physiographic frame that perfectly defines the Geopark’s territorial scope. The Loras present both a connection between the geology, landscape, and cultural singularities, which is not present in other nearby areas. The presence of several castros (forts), almost one for each Lora, and the uses that humans traditionally have given to this territory throughout time, give an exceptional coherence and cohesion to this UNESCO Global Geopark.

Las Loras UNESCO Global Geopark covers 16 municipalities of the Burgos and Palencia regions. The area has an extremely low population of less than 15,000 inhabitants. The depopulation of rural areas, one of the most pressing problems in the region, takes on a special meaning in this district, where the population density of many of its municipalities is under seven inhabitants/km2.

Arable and livestock farming are the main means of livelihood for these municipalities’ inhabitants, along with the biscuit industry in Aguilar de Campoo. The oil industry is also present in the territory with the only onshore oil field in the Iberian Peninsula located in Ayoluengo.Currently the UNESCO Global Geopark has 12 geological areas with more than 90 geosites, 16 natural sites