“Vast grassland, rich bio-diversity and unique human culture based on the volcano are its symbolic features” 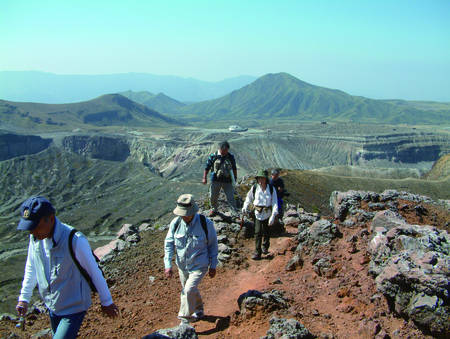 Aso Volcano is located in central Kyushu and is one of the most beautiful Quaternary caldera volcanoes in the world. Between 270,000 and 90,000 years ago, gigantic pyroclastic flow eruptions of andesitic to rhyolitic magma occurred four times in the volcanic field and formed the Aso caldera stretching 25 km north-south and 18 km east-west. Basement rocks consist of Quaternary Pre-Aso volcanic rocks, Cretaceous granites and sedimentary rocks, and Palaeozoic metamorphic rocks. Post-caldera central cones started to erupt soon after the last caldera-formed (90,000 years ago) and have produced large volumes of fallout tephra layers and lava flows. The rocks of the central cones are diverse; rhyolite, dacite, andesite, and basalt. Nakadake Volcano which is the only active central cone is one of the most active volcanoes in Japan. Its recent activity is characterized by ash and strombolian eruption and phreatic or phreatomagmatic explosion.

Aso UNESCO Global Geopark is a popular destination for school trips because of its unique and diverse geology and topography and it provides the opportunity for integrative and active education about the culture, history, and on disaster prevention activities of people living in volcanic areas. Eighty-one thousand students, mainly in junior high and high school from Japan and other Asian countries visit the area every year. They visit Nakadake Geosite, which is well maintained and allows for safe observation of the active crater, the Kusasenri Geosite, ideal for trekking on volcanic topography, and the Daikanbo Geosite, where students can look out over the magnificent caldera. Working together with curators and museum interpreters at the Aso Volcano Museum, they deliver lectures of volcanic disaster prevention, geological disasters, and the study of regional resources which are part of the curriculum for most elementary and junior high school students in the Aso region. Aso UNESCO Global Geopark continues encouraging children to learn about important resources as key step towards Aso’s long-term sustainable development.