“The diversity of the land from 0-3,000 meters made the world's oldest jade culture and varieties of traditional culture” 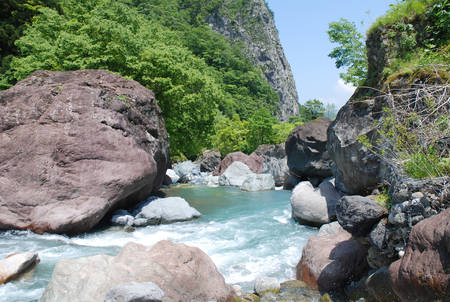 Itoigawa UNESCO Global Geopark is located near the centre of Honshu Island in the Niigata prefecture, Japan. The Geopark meets the Sea of Japan in the north, where the mountains of the Japan Alps sink into the sea, and is bordered in the south by high mountains. Topography ranging from coastal to alpine can be observed here, thus creating a wide variety of geology and topography, as well as richness in plant and animal life.

This shows how geology strongly influenced the culture, history and life of the people of Itoigawa UNESCO Global Geopark. Visitors to the area are increasing visiting many popular geosites. The main information centre is Fossa Magna Museum which is specialized in rocks and minerals. There are 24 separate Geosites within the Geopark that one can enjoy. Each Geosite presents many Geo-points, where one can observe the special features of each Geosite and one is sure to find something fascinating.

Local produce is an important part of the sustainable development. Rich topological and geological diversity provide abundant crab, fish, seaweed, vegetables, rice, and mushrooms, all used in traditional cuisine. Clean water has given rise to five local craft sake breweries. Local residents participate in Geopark Certification, Geopark Master Courses, and Geopark Guide Training while schools teach “geostudies” as part of the regular curriculum, preparing the next generation who will sustain our society and the UNESCO Global Geopark.