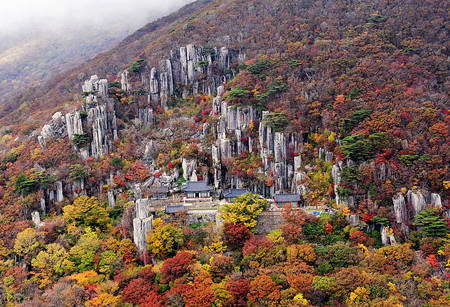 Mudeungsan UNESCO Global Geopark is located in the southern part of the Korean peninsula near the city of Gwangju and is centred around Mount Mudeung. This mountain towers high above the city and the surrounding lowlands (1,100 m) and lends the Geopark its name. Mudeungsan UNESCO Global Geopark covers an area of 1,051 km2 about half of which is covered with forest. The climate, influenced by the mountains, is warm and temperate with significant rainfall every month. The core area (75 km2) lies within Mudeungsan National Park.

Mt. Mudeung was formed by the Cretaceous volcanic activity about 87 million years ago. The Geopark features twenty geosites representing seven geological periods. The sites range from five large colonnades composed of Mudeungsan Tuff, formed by volcanic activity to extensive periglacially-produced block streams and cryoplantation surfaces, unusual microclimatic environments within talus accumulations, dinosaur footprints and trackways, and a variety of other geological and geomorphological features such as lengthy scenic cliff-lines and waterfalls.

The UNESCO Global Geopark is jointly administered by Gwangju City and two counties of Jeollanam Province. The total population of the city and counties is over 1.6 million. Mudeungsan has preserved its magnificent cultural heritages thanks to the active engagement of local people who have always cherished and protected the nature. Already in the 1990s, a group of locals started a social movement to conserve the area. Mt. Mudeung is also called ‘Mother Mountain’, which also refers to the residents’ admiration for this natural monument.

Many temples, cultural assets and art galleries reside in harmony with the magnificent scenery of Mudeungsan, which boasts of picturesque views of the different volcanic colonnades and many other topographic features including steep cliffs, block streams, natural caves and waterfalls. Many villages and cultural features in and around the area are closely connected to Mt Mudeung. The historic and cultural heritage of Mudeungsan can be classified largely as Buddhist relics, Confucian relics, pavilions, folk cultural relics, modern cultural properties and other important items. The cultural folk relics are linked to traditional rituals for rainmaking or invoking village guardian spirits as well as to tangible assets such as traditional totem poles or monumental stone poles.

Mudeungsan has long occupied a place in the spiritual world of the people of Jeollanam-do, the former Honam. In Korea mountain tops are frequently referred to as Cheonjedan – altars for celestial worship rituals. Mudeungsan was a cult destination for residents who built a shrine to pray for their families and village. Before the Shilla and Goryeo periods, worship was directed towards the good of the local people and subsequently of the country as a whole.