“Landscapes that treasure a memory of hundreds of millions of years” 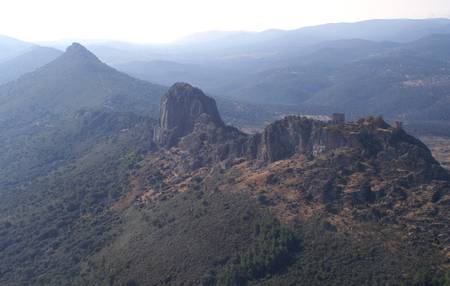 The Villuercas Ibores Jara UNESCO Global Geopark is located in the south-east of the province of Cáceres (in Extremadura, Spain).

The beauty of this unique landform is characterized by structurally-controlled morphological features responsible for the intensely folded and fractured landscape. The UNESCO Global Geopark shows an inverted topography with elevated narrow Variscan synclines (residual Appalachian Relief) with Lower Palaeozoic siliciclastic rocks, including the Armorican Quarzite which marks the highest topography. The depressed anticlines preserve the oldest rocks in the area (Ediacaran greywackes, shale and carbonates), folded during the Cadomian Orogeny. The Alpine Orogeny resulted in a central Villuercas horst flanked by two grabens with Neogene fluvial braided marginal sediments. The Pleistocene “Rañas” include broad clast-supported fluvial sediments that form a remarkably flat horizontal landscape and mark the change from internal to external drainage of main rivers. The Ediacaran-lower Cambrian is unique in containing the early mineralised metazoan Cloudina and ichnofossils. The Lower Paleozoic rocks yield exceptional ichnofossils (Cruziana and Daedalus), and fossils including trilobites, brachiopods and graptolites. Important events (the Cambrian Radiation, Ordovician Radiation, and the Ordovician mass extinction) are represented. Of special note is a karstic cave declared a Natural Monument.

Forty-four geosites have been cataloged as ridges, hills and mountains, faults, river valleys, places with special geomorphological features such as synclines and anticlines, mines, and paleontological deposits. Paleontological deposits are important to explain the great event in evolution known as the “Biotic Explosion of the Cambrian”, 540 million years ago. Many of the geosites are also of cultural interest, having shelters and cave paintings. The cave of Castañar de Ibor has been declared a natural monument due to its impressive aragonite crystal formation, since Aragonite only forms in specific conditions of pressure and temperature.

The UNESCO Global Geopark is also extraordinarily rich in natural heritage including protected birds, biodiversity corridors, monumental trees, and Biosphere Reserves, with emblematic species such as the abundant cranes and raptors linked to the quartzite outcrops of the sierras: griffon, black and Egyptian vultures, black storks, eagle owls and golden eagles.

The Villuercas Ibores Jara UNESCO Global Geopark comprises 19 municipalities and 26 villages. The main village is Guadalupe (World Heritage Site since 1993). The UNESCO Global Geopark’s Visitor Reception Center is located in Cañamero. This territory has a low population (15,553 inhabitants) but covers a significant territory (2,544. 4 km2). This vast area and the limited number of inhabitants have, in consequence, a very low population density. The area also shows a high degree of ageing, associated with the loss of young population.

The natural and geological elements of the Geopark are complimented by a long history of mining and an associated culture with a tradition of decorated menhir stones, or monoliths, remnants from the Bronze and Iron Ages. Likewise, there are many cultural sites from Roman times and the Middle Ages. One of the most striking aspects of the Sierras de las Villuercas is the high concentration of archaeological sites. These sites confirm the continuous presence of humans from the earliest times of homo sapiens to the present day. The Royal Monastery of Guadalupe, declared a World Heritage site since 1993, is also located within the Geopark.

Geocentros (Geoschools) is the name of the UNESCO Global Geopark educative project. It involves all the Rural Schools, Primary and High Schools, Adult Lifelong Education Centers and the Teachers Support Centers of Trujillo and Navalmoral. The project aims to improve the knowledge of the geological, natural and cultural heritage of Villuercas-Ibores-Jara in the school. Geocentros is a joint initiative of the Regional Ministry of Education and Culture, the Cáceres Provincial Council and the University of Extremadura. The textbook Environmental Awareness of Villuercas Ibores Jara UNESCO Global Geopark is used in the classroom.

The LEADER Group “APRODERVI” and the Geopark Tourism Companies Association “Geovilluercas” are local members of the UNESCO Global Geopark. Since 1998, APRODERVI is responsible for the sustainable development strategy. It promotes entrepreneurship, social participation, vocational training for adult people and cooperation projects. The companies that provide geotourism services can be found at the Geopark’s Tourism Services Catalog, on the website.