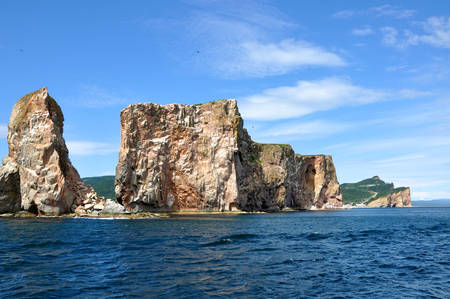 Percé UNESCO Global Geopark is located on the eastern most tip of the Gaspe Peninsula, east of Quebec, in Canada. The Peninsula's climate, greatly influenced by its relief, is generally classified as boreal with cold dry winters (-20°C), but mild summers (over 10°C).

The territory of the UNESCO Global Geopark features two distinctly different environments: terrestrial and marine. The terrestrial environment has various reliefs, while the marine environment offers a large diversity of landscapes like cliffs, islands, beaches and bays. This area contains several ecosystems, which give the region its diversity in wildlife and flora. The most remarkable and most famous natural phenomenon is the presence of the world’s largest accessible Gannet colony on Bonaventure Island, with over 121,000 gannets counted in 2008.

The UNESCO Global Geopark is located in the heart of a large orogenic chain, called the Appalachian Mountains, which covers the Atlantic slope of the North American continent. Its formation, related to magmatic and tectonic events, is linked to the opening of the Atlantic Ocean during the Jurassic and the Cretaceous periods (ca. 150 million years ago). In the last 20 thousand years, during the last Ice Age, the Quebec segment of this chain has been submitted to the erosive action of glacial elements, which has shaped the actual landscape. Visitors of the UNESCO Global Geopark can discover a territory particularly rich in rock archives (rocks and fossils) and various landforms that testify to its ancient and recent past. Rocks record 170 million years of the regional geological history in a very small area (40 km²) and it is possible to see some glacial remains from the Quaternary. These rocks, unlike many of their counterparts elsewhere in the Appalachians, are poorly metamorphosed, which makes it possible to recognize the textures and structures formed during their deposition. The rocks allow one to contemplate on several geological phenomena: from sedimentation to faulting processes (of meter- to kilometre-scale) and linked deformation, erosion, sedimentary transport, landslides, fossils and coal deposits (the only known occurrence of coal in the province of Quebec).

Percé has also witnessed the birth of geology in Canada, since it was this region where Sir William Logan, the first director of the Geological Survey of Canada, started the geological mapping of Canada.

An important pole of North American colonization, the Percé village was founded on cod fishery. These days it no longer has the strategic economic role it enjoyed following the British Conquest. Currently, 3,289 people inhabit the Geopark year-round. The main economic activities in Percé are related to tourism, fishing and forestry. Artisans have found inspiration in the UNESCO Global Geopark’s richness. It is possible to find jewellery integrating regional stones in the design, as well as hand fashioned gannets or chocolates in the shape of Percé Rock.

The territory has a rich cultural heritage with historically important buildings, an important trail network and various cultural sites and activities. The Percé UNESCO Global Geopark, while engaged in protecting its territory, also wishes to provide environmental awareness and education for visitors. To ensure this mission, Geopark guides receive training on regulations and raising public awareness about environmental conservation. The local community is extremely involved in the UNESCO Global Geopark.