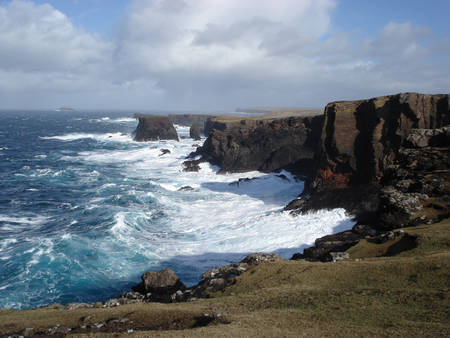 Shetland UNESCO Global Geopark consists of a group of over 100 islands, 15 of which are inhabited. The landmasses of the larger islands are generally in the form of roughly north-south ridges of hills forming the 'spine' of Shetland. The hills, mainly composed of acidic granite, schists and gneisses, are treeless and generally covered by peat or blanket bog. The valleys of the central Mainland are underlain by crystalline limestone and are generally more fertile and, together with sandy coastal areas, form the best agricultural land.

From the highest sheer cliffs in Britain to the best ‘hands on’ exposure of the Great Glen Fault, Shetland UNESCO Global Geopark is more geologically diverse than any similar sized area in Europe. Where else can you walk on ancient oceanic crust, explore an extinct volcano and stroll across shifting sands all in a day? Shetland’s rocks and landscape are impressive to look at, but a little interpretation reveals the fascinating stories behind them. Over hundreds of millions of years from the Precambrian to the Devonian the climate and landscape have changed dramatically many times and echoes of these past environments have been literally set in stone. This tiny windswept archipelago has played host to tropical seas, volcanoes, deserts, ice ages and ancient rivers. The islands can boast the best section through the flank of a volcano in the UK, the best exposure of one of Europe’s major tectonic faults, and are one of the best places in the world to see a compact vertical section through ancient oceanic crust.

Shetland’s complex and varied geo-diversity consists largely of metamorphic rocks, mainly of sedimentary origin altered by heat and pressure as the Caledonian Mountains were built, overlain by sedimentary and volcanic rocks which formed towards the end of that orogeny. In places the underlying basement of Precambrian gneiss (almost 3 billion years old) can be seen. North-east Shetland contains an ophiolite - ocean crust caught up in the continental collisions which formed Pangaea. The landscape has been sculpted by rivers, glaciers and the sea. Major landforms survive from before the last Ice Age. Though signs of glacial erosion are clear, some peat deposits survive from the last interglacial warm period. Shetland is sinking and shows geomorphological features of a recently drowned coastline. Exposed cliffs up to 370 metres high contrast with a gentler “inner” coast of flooded valleys where rising sea level has created sand and shingle beaches, bars and tombolos.

The Shetland landscape of today is home to an amazing biodiversity. Over one million seabirds inhabit the cliffs and moorland, with 70 different bird species breeding in the isles and over 430 migratory species recorded. As well as large colonies of puffins and gannets the islands are home to fifty percent of the world population of the globally rare Great Skua.

The richness of the geology and geomorphology is the foundation for the many layers of natural habitat and human history that make the Shetland UNESCO Global Geopark so special. The earliest settlers arrived in Shetland almost 6000 years ago but the islands are perhaps best known for their Viking and Norse inhabitants between the 8th and 15th centuries. Geology has been fundamental to the development of many aspects of human life in Shetland from early settlement patterns that exploited the most fertile soils, to a range of drystone building techniques made necessary by the lack of native trees. Most recently Shetland became part of a global industry following the discovery of the North Sea Oilfields to the west of the islands.

Shetland UNESCO Global Geopark works to safeguard, promote and make accessible the geology of Shetland and its links to natural and cultural heritage, in a sustainable way to the benefit of Shetland. Since the development of the UNESCO Global Geopark began in 2006, over £250,000 has been levered in from outside Shetland to deliver interpretive and educational projects and promotional activities. The UNESCO Global Geopark has developed a wide range of tourism infrastructure to support the industry throughout the islands. It leads the Shetland Environmental Education Partnership, which gives practical support for schools in the delivery of Curriculum for Excellence, and leads the organization of the annual Shetland Nature Festival in partnership with European Geoparks Week. Shetland UNESCO Global Geopark has developed a geosites register and implemented a five year monitoring plan for geodiversity sites, many of which lack statutory protection.