“The largest number of karstic phenomena in Belgium ánd in Europe” 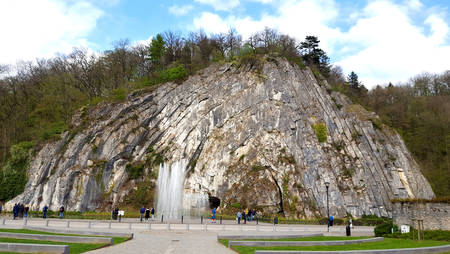 Famenne - Ardenne UNESCO Global Geopark is located in southern Belgium, in the region of Wallonia. Three distinctive units mark the landscape: the northern Famenne, a large depression with schistose substratum, the southern Ardennes, a vast plateau mainly composed of sandstone rocks and, the central ‘Calestienne’, a calcareous bedrock topography rich in karst phenomena.

The geological formations date from the Paleozoic (541 to 251 million years ago) where sandstone, limestone and clay were deposited in a marine environment according to the climate and the proximity of the continent. These deposits were folded during the formation of the Hercynian mountain range (around 295 million years ago) and then flattened in the Meso-Cenozoic.

The Ardennes consist of lower Devonian sandstones (419 to 393 million years old). These rocks create a distinct relief in the southern landscape of the Geopark defined by the term "Ardennes plateau" and it includes the highest relief of the Geopark (560 m). The Central ‘Calestienne’ is composed of Middle Devonian limestones (393 to 383 million years old) perforated with karstic channels and punctuated by cliffs. Finally, the northern schists associated with the vast Famenne depression, date from the Upper Devonian (383 to 359 million years ago). The Famenne also incorporates in the N-E part of the Geopark some synclines of Carboniferous limestones (359-331 million years ago). This juxtaposition of lithologies bestows the region with a contrasting relief directly related to the nature of the substrate. Belgium has been a pioneer in the study of stratigraphy and Paleozoic palaeoenvironmental reconstruction.

Concentrated limestones in the center of the territory are affected by intense karstification, which make the Geopark a region of Europe particularly dense karst phenomena. Its karst is emblematic with the disappearance and reappearance of rivers, the presence of dry valleys and the existence of caves and remarkable sinkholes. The caves of Han, Rochefort and Hotton are exceptional and of international reputation not only in terms of tourism but also due to their wealth of scientific studies.

Finally, the geological characteristics and the existence of karst are intimately linked to human activities such as limestone exploitation, nature tourism and the production of the famous "Trappiste de Rochefort" beer. Human activities have shaped the landscape since ancient times. The limestone grasslands rich in biodiversity are an emblematic expression of this.

The Geopark comprises of eight municipalities (Beauraing, Wellin, Rochefort, Tellin, Marche-en-Famenne, Nassogne, Hotton and Durbuy) with a population of 67,000 inhabitants. Agricultural activities are an important part of the regional economy, centered on local products. Cultivated land and grasslands make up 52% of the landscape. The wooded areas preserve the natural character of the region and together with its limestone meadows attract many tourists. In terms of cultural sites, ancient Roman buildings preserved or restored in several villages rank among the popular tourist attractions.

All these elements blend harmoniously into a contrasting landscape between the Ardennes (560 m) to the south and the Famenne depression (115 m) to the north. It is one of the key destinations of Wallonia, with its exceptional caves of Han, Rochefort and Hotton, its picturesque towns like Durbuy ‘the smallest city in the world’ and its castles. The Famenne - Ardenne UNESCO Global Geopark is a unique blend of natural sites and landscapes and cultural and historical highlights. The tourist offices promote with not only the tourist expertise but also the enthusiasm to welcome its visitors in the best possible way a wide spectrum of accommodation and attractions.

The aim of the Famenne - Ardenne UNESCO Global Geopark is to promote the geological, built, natural and cultural heritage, and, while also facilitating access to visitors, to protect these sites, and its associated fauna and flora. The educational role of the Geopark, in close collaboration with scientific research activities in the territory, is particularly important to improve understanding of geological systems and interactions with other systems (atmosphere, biosphere, and hydrosphere). This will lead to a better management and valorization of the territory and among other things its geological heritage, both scientific and touristic, essential in the sustainable management of our subterraneous resources.