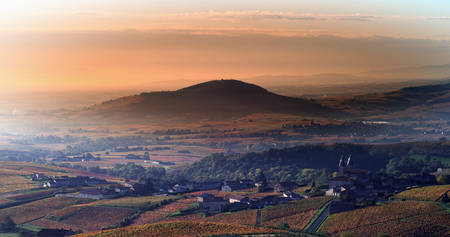 Beaujolais UNESCO Global Geopark is located in the Auvergne-Rhône-Alpes region in southeastern France. The Beaujolais is renowned worldwide for its wines and the territory benefits from an exceptional geological diversity that has been shaped over nearly 500 million years. Three types of topographical relief characterize the region: the Saône River plain at the eastern border, the wine growing area made up of gentle slopes interrupted by wood-covered valleys and the mountains of Beaujolais extending throughout the west and reaching heights of over 1,000 meters at the regions borders.

Located on the eastern edge of the Massif Central and in direct view of the Alps, the UNESCO Global Geopark enjoys a privileged geographical location in the heart of Europe and has a rich and complex geology. The igneous crystalline and metamorphic basement offers a comprehensive history of the evolution of the Hercynian orogenic belt, a series of mountain ranges developed during the Late Paleozoic era (350 to 290 million years ago) as a result of the collision between the supercontinents Gondwana and Euramerica. This period of the geological history of the Beaujolais is a remarkable testament of the geological processes that took place in the deep roots of the high mountain chain, which is of key importance to global paleogeographic history. The secondary sedimentary series cover a timespan of nearly 80 million years. The diversity of lithologies and structures is linked to the diverse epicontinental marine geological history, marked by a wide range of depositional environments. Tectonic movements during the Paleogene (45 to 25 million years ago) and during the Neogene (10 to 5 million years ago) related to the formation of the Pyrenees and after that the Alps, caused an intense fracturing of the basement and sediment cover, and a recovery of western Beaujolais and a general shift of geological sequences to the east. Benefitting from the large depression that formed between the Beaujolais Mountains and the Jura Mountains, a vast hydrographic peri-Alpine network developed at the end of the Paleogene (about 3 million years ago). It grew progressively into the

large alluvial and fluvio-glacial domain of the Saône River today. Benefiting from a wide range of geological formations, the Beaujolais region has been the subject of numerous scientific studies, having addressed all major scientific topics of both fundamental and applied geology.

The physical geography has led to the establishment of specific natural environments, such as moors, pastures and woods on acid or calcareous soils, bogs, altitude wetlands and peri-fluvial grasslands that are inhabited by a number of unique flora and fauna species.

The territory of the UNESCO Global Geopark comprises of 128-member municipalities and a population of more than 225,000 inhabitants.

The Beaujolais exhibits a rich cultural heritage, manifested in the numerous historical buildings such as castles, churches, villages of character, which stand out due to the remarkable architecture and stone varieties used for traditional construction, reflect the geological diversity of the Beaujolais region. Mont Brouilly is one of the most emblematic sites of the Beaujolais UNESCO Gobal Geopark. Rising in the heart of the wine-growing coast, Mont Brouilly is witness to the long and tumultuous geological history of Beaujolais. This geosite offers spectacular panoramas and a sustainable layout to discover its geology, history and legends, the vineyards and forests of Beaujolais. Beaujolais’ economic development has always been based on local resources such as viticulture, textile industry and forest exploitation.

The Beaujolais UNESCO Global Geopark seeks to involve residents and local communities in the management and planning with the aim of raising awareness among as many people as possible in the region about geological heritage. It also aims to evaluate and enhance the residents’ interest in this project, and hence increase the human resources and long-term interest around this project. The project of the Beaujolais adopts not only a local but also a participative approach to create and formalize a sustainable network of exchanges with other territories.

Beyond its geology, the Beaujolais UNESCO Global Geopark is a land of ecotourism that holds treasures for those who appreciate landscapes, the generosity of nature and likes to savor local products.