“The long and diverse geological history in Scandinavia's first Geopark” 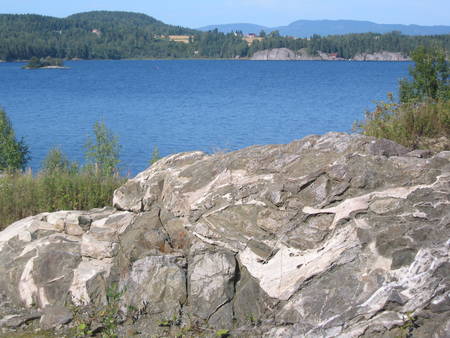 Gea Norvegica UNESCO Global Geopark is the first in Scandinavia. It is located in southeastern Norway, in the counties of Vestfold and Telemark at the western side of the Oslo Fjord.

The story told in this UNESCO Global Geopark is a 1.5 billion year-long journey, from old mountain chains, the tropical sea, strange volcanoes, rifting of a continent and a glaciated surface –and how we all depend on this geological diversity and natural resources. Most likely the oldest rocks are from the Precambrian Gothian orogeny, which happened about 1600 million years ago. The eastern part of Gea Norvegica UNESCO Global Geopark is situated on the margin of the Carboniferous-Permian (350-250 Million years ago) Oslo Rift, with larvikite, the national rock of Norway, as the dominant rock that derived from the slow cooling of a magma allowing thumbnail-sized crystals of feldspar to develop. To the west one can find remnants of the old continent, the Precambrian bedrocks, deep magmatic rocks, strong metamorphosed and metasediments from the Sveconorwegian Orogeny. In the center of the Geopark one can find lower Paleozoic fossil-rich sediments, once the sea bottom in a shallow, tropical sea, teeming with life. 580 million years ago, the carbonatite Fen volcano was active and created the Fen Carbonatite Complex, now the world's type locality for magmatic limestones. The surface and landscape is sculptured through the Quaternary glaciations, especially the last. The last ice retreat has given rich agricultural soils and natural resources as sand and gravel.

The flora in this part of Norway is rich and diverse, due to the geology - including limestones, fertile basaltic rocks and marine clays, and sand from the last Ice Age. The soils are also important for the valuable agriculture, as our forefather have known for several thousand years ago. The area also has a rich industrial history, with a close connection to geology, from Norway’s oldest iron mine to Larvikite quarrying.

Although Norway is a country having its income mainly from geological recourses (petroleum, mining industry, agriculture) general knowledge of geological heritage is quite low in society. Education is therefore our main task. Inside the UNESCO Global Geopark are more than 100 schools and a huge amount of kindergartens. The UNESCO Global Geopark staff provides schools with teaching materials, lessons and field trips. The UNESCO Global Geopark also cooperates with Universities and university colleges, but as important is communication with local people and visitors. Sustainable development, mainly through small scale entrepreneurs, is aimed towards tourism development. The area is not the main tourism target in Norway, but the number of summer cottages is fairly big, with a lot of guests during summer. The aim is to make tourists stay longer, stop over on their way to the west coast, discover the area and buy local products.