“Lofty mountains with breathtaking views: the result of years of weathering and erosion” 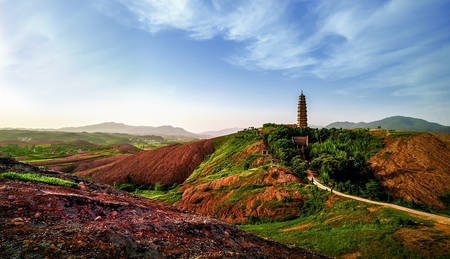 Huanggang Dabieshan UNESCO Global Geopark is located in the Hubei Province in central China. The terrain is marked by higher elevations in the north and lower elevations in the south. Its unique location as part of the warm subtropical monsoon zone causes a humid climate, abundant rain and distinctive seasons, which have created a region with dazzling biodiversity. The area demonstrates the geological evolution of eastern China. The collision between the North China Plate and the Yangtze Plate has laid the foundation for the tectonic framework and led to the formation of the Dabie central mountain range. The area is located in the south of the Dabie Mountains and retains ancient continental roots of the geologic processes related to the formation of the mountain range, shown in the combination of specific rock types and rock sequences, e.g. garnet biotite gneiss and greenstone belt, exposed more than 2.8 billion years ago. The high-pressure and ultrahigh-pressure metamorphic rock, eclogite, is key evidence of the subduction and collision between the North China Block and the Yangtze Block. Two large shear zones in the northwest and northeast extension reflect the tectonic deformation related to the formation of the Dabie Mountains, which exposed a wide range of intrusive rocks from the Neoarchian era (2,800 to 2,500 million years ago) to the Mesozoic era (252 to 66 million years ago).

Huanggang City, where the Geopark is located, has about 8.1 million inhabitants (2017), mainly of Han nationality with a few scattered minorities of Tujia, Zhuang and Hui nationality. The economy in this area is mainly related to agriculture of food crops such as rice, corn, sweet potato, wheat and potato and cash crops such as oil plants, tea and medicinal materials. Since the establishment of Huanggang Dabieshan National Geopark in 2012, the infrastructure in the Geopark has gradually been improved. With the integration of tourism resources, the tourist industry of Huanggang City is developing rapidly. A significant number of people are now employed in the tourism sector, either directly or indirectly. The development of tourism has led to the rapid growth of service industries including transportation, commerce, catering, culture, sports, communications, information and logistics and has promoted protection of the ecological environment and cultural heritage.

Huanggang Dabieshan UNESCO Global Geopark provides science classes for the tourists in its Geological Education Centers, museums, and through educational materials that tell about exploring the Earth, protecting the environment and appreciating the scenery. In addition, it has become an important tourist destination with a rich geoheritage, unique ecological landscape and beautiful cultural sights. Huanggang Dabieshan UNESCO Global Geopark has organized several projects through the participation of different regions to build a relationship with the local community based on mutual respect and trust, an integral part of the Geopark’s heritage, which benefits all.