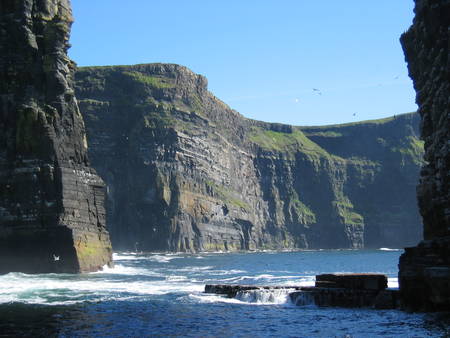 Located on the west coast of Ireland, the Burren & Cliffs of Moher UNESCO Global Geopark has an area of 530 km2, it is bounded by Atlantic coastal cliffs (10-200 m high) to the west, the Gort lowlands to the East and by low hilly terrain to the south. Much of the land is at an elevation of 100 m-200 m above sea-level; the highest point is Slieve Elva at 344 m. The area of limestone which comprises most of the UNESCO Global Geopark has few rivers and only one (Caher River) which flows its entire length over ground.

The geological landscape is one of glacially smoothed Carboniferous (300 million years ago) fossil-rich limestone hills; dramatic sea cliffs; seasonal lakes; and vast networks of subterranean caves. This physical landscape hosts rare natural habitats and unique floral assemblages not found anywhere else on Earth; as well as abundant legacies of human settlement dating back over 6000 years.

The Burren & Cliffs of Moher UNESCO Global Geopark is formed of Carboniferous limestones sandstones and shale (320-300 Ma). The limestones were formed in warm shallow water conditions on a carbonate shelf close to the equator. Fossil brachiopods, corals and crinoids are abundant. The limestones contain abundant caves including one of the longest free hanging stalactites in the world open to the public and are extensively karstified. The extensive limestone pavement is considered to be one of the best of its kind globally. The limestone is overlain by deep water shales and prograding cyclical deltaic deposits. Slumped units with sand volcanoes, turbidites and channel deposits are common. Typical fossils are goniatites, bivalves, and plant material. The sequence is part of some of the finest coastal exposures of ancient deltaic sedimentation in the world.

Farming (beef and dairy) and tourism are the main industries with the Cliffs of Moher Experience attracting over 1 million people in 2014. Population density is low and dispersed through villages and towns such as Doolin, Corrofin, Ballyvaughan, Lisdoonvarna and Kilfenora.

The Burren & Cliffs of Moher UNESCO Geopark is home to an active network of environmental learning centres, accredited ecotourism businesses, conservation groups, visitor information and interpretation centres, local farm-tours co-operatives, and managed outdoor recreation routes and hubs. Traditional agricultural practices successfully prevail, enabling the conservation of the unique character and biodiversity of the landscape. The collaborative efforts of community-based education, ecotourism, and conservation initiatives are an essential part of the sustainable social, environmental, and economic development of this Atlantic edge region. The Geopark encourages a holistic approach to managing, conserving and promoting the landscape, as each aspect of the environment: geological, ecological, climatic, oceanographic and anthropogenic, is mutually influenced by one another.