“Where dinosaurs once walked” 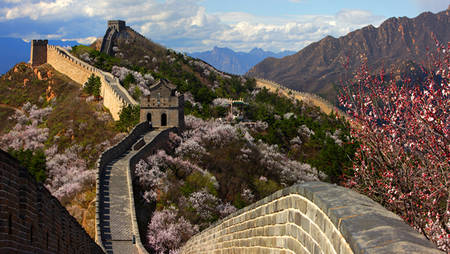 Yanqing UNESCO Global Geopark has experienced a long geological history, and created abundant geoheritage sites. On the bedding planes of thousand-meter carbonate rocks formed about 1.9 Ga to 0.8 billion years ago, there are various and complex ripple marks. It also has particular angle unconformity in the geologic history; as well as the various intrusive rocks, extrusive rocks and many contact relations formed in the different stages of Yanshanian movement; furthermore, there are large-scale piedmont fault, nearly vertical strata, huge dome, anticline and magnificient monoclinal structures formed in Yanshanian movement. In addition, the flourishing plants and numerous dinosaurs lived during the period of Yanshanian movement have left abundant silicified woods and dinosaur footprints, according to these footprints, there were not only common meat-eating theropods, but also plant-eating sauropods, ankylosaurs and ornithopods living in the Geopark at that time, which are not discovered in adjacent regions. These dinosaur footprints have become the unique and precious geoheritage in the Geopark. Since the Cenozoic, the Yanshanian movement-induced dense faults and joints cut the exposed Meso- to Neoproterozoic carbonates into many blocks, the karstification has shaped these rocks into magnificent karst landforms, so the Geopark has become one of typical North-China-type karst landform sites in China.

The long geological history has created peculiar geological landscapes and picturesque natural beauties, as well as a sound eco-environment and brilliant cultural history. Yanqing UNESCO Global Geopark had human activities as early as about 40-50 thousand years ago, with numerous cultural relics, a lot of stone tools have been unearthed. Yanqing belonged to the territory of Northern Yan in the Warring States period, the ruins of Yandynasty Great Wall are still visible. The Great Wall, which was built in the Ming and Qing dynasties, has become a world cultural heritage site. The famous Great Wall is also closely related to geological history, and it was built on the exposed waved surface of the Badaling complex rock, which was formed in the late Yanshanian movement, so it has become a vivid example of perfect combination between geoheritage and historied culture.

Sustainable development is a national policy. The natural environment is considered a basis for sustainable development. The economy is the tool to achieve sustainable development. For the development of geotourism in the UNESCO Global Geopark, the Yanqing UNESCO Global Geopark museum and visitor centers put a lot of efforts into providing enriching, understandable geological information for students and the general public. It publishes such information for public use and provides training to teachers so they can carry out geological educational activities on their own. The geotourism policy emphasizes both individual and group tours. Individual tours are facilitated through the provision of facilities and education materials. For group tours, guidelines were formulated, covering the following main concerns: Safety, reasonable and transparent prices, clear tour information for visitors to select and prepare for the tour, Interpretation provided by trained and qualified geotour guide.