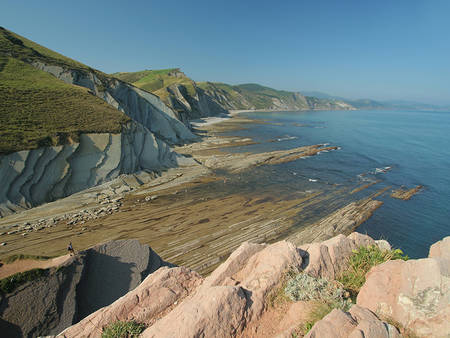 Basque Coast UNESCO Global Geopark constitutes an area of great interest and scientific importance. It is mainly made up of sedimentary rocks dating from the upper Triassic Period (215 million years old) to the Middle Eocene Epoch (45 million years old) formed during the opening and closure of the Bay of Biscay. The coastal outcrops, a 5000 m thick flysch deposit, of the Basque Coast UNESCO Global Geopark reveal, layer by layer, a practically continuous record of some 60 million years of the history of our planet, including several ancient global crises and catastrophes. One of these layers marks the last of the five mass extinctions to have taken place over the course of the Earth’s history. This event (also known as the K/Pg or P/E extinction event), which was probably caused by a large asteroid striking the Earth some 65.5 million years ago in Chicxulub (Mexico), also led to the demise of the dinosaurs. It has also two Global Stratotypes (GSSP) defined by the IUGS – UNESCO at the base of the Selandian and Thanetian stages.

The coastline is defined by very active geomorphological processes with an impressive abrasion platform. The interior of the UNESCO Global Geopark is defined by a very intense karstic erosion resulting in more than 200 caves, pinnacle morphologies and poljes.

The municipalities of Zumaia, Deba and Mutriku make up the Geopark territory and the population is approximately 20.000.

The geological and natural values of this stretch of coastline led to it being declared a Protected Biotope by the Basque Government. Since 2002, geotourism has developed successfully in the area, which now offers an expanding programme of scheduled activities on land, sea, or a combination of the two. The educational value of this environment is also very important, as shown by the success currently being enjoyed by initiatives such as the Algorri Interpretation Centre in Zumaia and the Nautilus Fossil Museum in Mutriku. Thus, this area allows comparisons to be drawn between past crises, extinctions and other events, with those we face today, thereby raising the awareness of the general public.

The Basque Coast UNESCO Global Geopark carries out a strong and committed work for education. Algorri Interpretation Centre is the reference in geology and environmental education activities for school children, not only for locals but also for other schools from the Basque Country. It has a busy program throughout the year, including workshops and field trips. It has developed a suitable material for each age and they improve their material every year with new activities and innovative methods of education. The local development activities are related mostly to local products. The UNESCO Global Geopark is promoting the cooperation among farmers (producers), restaurants, and markets to raise the value of the local product though gastronomy. Different activities like showrooms, competitions and gastronomy events are organized to raise awareness the population and cooks on the use of local products.