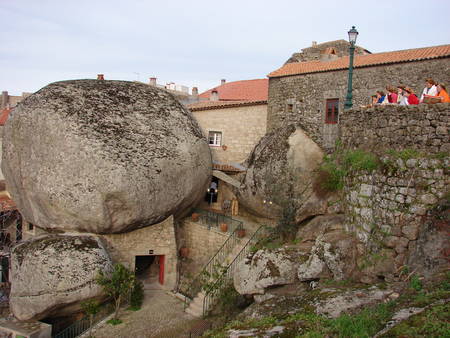 Naturtejo da Meseta Meridional UNESCO Global Geopark is located in the centre of Portugal, near the border with Spain. The UNESCO Global Geopark is located in the so called Southern Iberian Meseta, a polygenetic peneplain cut by the Tagus river into a deep valley at the south and bordered on the north by the Central Iberian Belt. The landscape is composed of a wide plain broken by residual relief coming from past climates and a staircase of flat topped tectonic-faulted blocks deeply incised by rivers and streams that are more prominent towards the north.

Naturtejo da Meseta Meridional UNESCO Global Geopark is rich in geological heritage, starting some 600 million years ago, with deepsea turbidites evidencing some simple life forms. It is located at the southern border of the Central-Iberian Zone, one of the terranes that constituted the Iberian Massif during the Variscan Orogeny. The Geopark’ is characterized by very ancient landscapes, such as the 50 million-year-old Meseta Meridional peneplain, the quartzitic crests and gigantic white ramparts that rise from the plateau and represent the ancient Ordovician ocean. 170 geosites were identified to tell locals and visitors the stories from Earth in this region of Iberia, from Neoproterozoic to Quaternary times. The outstanding geoheritage is highlighted at geosites like the Ichnological Park of Penha Garcia, Portas do Ródão and Vale Mourão gorges, the Roman gold mine of Conhal do Arneiro and the granite landforms from Serra da Gardunha and Monsanto. An internationally known trace fossil site records the behaviour of large trilobite communities at the dawn of the Ordovician biodiversification event. The Variscan orogeny is well documented here, including anatectic granite development and related tin-wolfram (gold) ore bodies, as well as the Alpine orogeny that has shaped the landscape, mostly by reactivation of older very large faults. There are well developed examples of Inselberg and Appalachian-type landforms as well as a complete history of the Tagus river recorded in the alluvial terraces, where the first hominids in the region thrived some 300,000 years ago and the last remains of forest elephants in Europe were found. Iron age-to-1960s mining heritage is also preserved in nationally important sites.

The UNESCO Global Geopark is located within the boundaries of six municipalities: Castelo Branco, Idanha-a-Nova, Nisa, Oleiros, Proença-a-Nova and Vila Velha de Ródão. It has 88,164 inhabitants in the latest census of 2011 concentrated in the single city of Castelo Branco and more than 400 villages. People live mostly from services and commerce but agriculture (olive oil, cheese and meat) and forestry are still very important. It has strong historical and cultural components, and promotes the integrated development of tourism. The Geopark is a strong partnership of municipalities and local entrepreneurs for sustainable development. Naturtejo da Meseta Meridional is a public-private partnership responsible for fostering sustainable development in the territory of the UNESCO Global Geopark. Together with the six municipalities and more than 50 associate and partner companies, Naturtejo da Meseta Meridional provides scientific and technical support for protection of geological heritage and regional development projects to organize sustainable tourism diversification and promotion under the umbrella of the UNESCO Global Geopark.

Geoconservation is one of the main aims of Naturtejo da Meseta Meridional UNESCO Global Geopark with several areas protected by local and national laws, providing interpretation to sensitize people to the importance of geology. Naturtejo da Meseta Meridional is responsible for a broad number of educational programs devoted to local schools, but also including international school visits every year. From kindergarten to university and senior college, the UNESCO Global Geopark offer a wide range of educational activities especially prepared by our team of geologists and former school teachers, both at the geosites and local museums, but also in the classroom, according to the Ministry of Education’ curricula. These programs are guided by experts in geosciences and are implemented in different places of the Geopark depending on the particular program. This allows the students to learn about the various geosites and to better understand the history of our planet. The Naturtejo da Meseta Meridional UNESCO Global Geopark educational programmes were awarded internationally by Skal International and the national exams on geology and natural sciences include many examples of the UNESCO Global Geopark’s diversity almost every year.

Naturtejo da Meseta Meridional offers a large network of trails with more than 550 km that invite visitors to discover the area’s geodiversity and culture. Boat trips in the Tagus and Zêzere rivers and bus tours are also available. There is also a museum network that enables the visitor to discover geology and local culture. Local products and real geoexperiences are available in the villages where time flows gently and good life keep goes on.