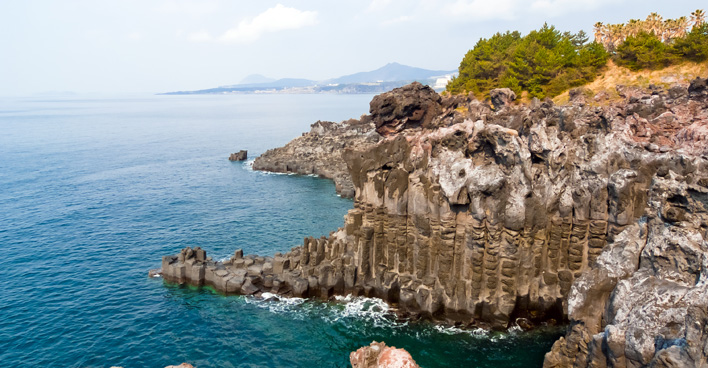 Jeju Island UNESCO Global Geopark, a beautiful volcanic island, is the southernmost island of the Korean Peninsula. It is located in the center of northeast Asia with mild weather which retains clean air because of land and sea breezes and temperature is rarely below zero thanks to the warm Kuroshio Current. Jeju Island is the youngest volcanic island in Korea and various volcanic landforms are well preserved such as lava tube caves, small volcanic edifices, volcanic shield, etc. It provides various magnificent landscapes from alpine plants of Mount Hallasan to colorful soft temperate corals under the sea.

Jeju Island UNESCO Global Geopark is a Quaternary shield volcanic island characterized by an overall gentle topography and an elliptical shape, situated off the southern coast of the Korean Peninsula. The island was produced by volcanic activity which occurred from about 2 million years ago until historic times. Basaltic to trachytic lavas occur extensively on the island together with diverse volcanic landforms, including Mount Hallasan that rises at the center of the island and about 360 volcanic cones that are scattered throughout the island. In the subsurface, however, numerous hydromagmatic volcanoes (tuff rings and tuff cones) produced by explosive hydrovolcanic activity occur extensively together with intervening volcanoclastic sedimentary deposits.

There is cultural diversity within Jeju Island UNESCO Global Geopark where marine and continental cultures including China co-exist. The Jeju Island Special Self-Governing Province has established its organization to handle the Geopark’s management and operation, which will create economic benefits and sustainably conserve the natural environment and geoheritage on the island. Various kinds of activities to publicize the importance of UNESCO Global Geoparks and to preserve natural heritages include enlargement of guidance infrastructures (guided trail program and so on), education of local residents, training of guidance, promotion of UNESCO Global Geoparks and geosites, development of geosites brand product (geo-food, geo-gift and geo-buddy character and so on), recultivation of traditional culture festival, finding of additionally potential geosites with geoheritage value, and extension of the international partnership with Global Geopark Network members.

Jeju Island does not only carry the UNESCO Global Geopark label, it has also been awared the UNESCO Biosphere Reserve and World Heritage label.