“About 200 Tonkin snub-nosed monkeys live in the Geopark, the only place in the world where one can still find them” 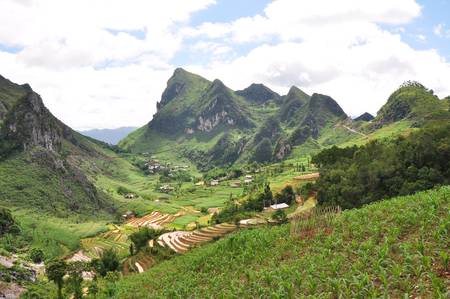 Dong Van Karst Plateau UNESCO Global Geopark is located in the northeastern province of Ha Giang, a mountainous province located in the far north of Viet Nam. Most of its surface is limestone (about 60%). Its landscape is spectacular and unique having high mountains and deep canyons. The highest peak is Mieu Vac Mount (1971m) while Tu San is the deepest Canyon (700-800 m deep).

The UNESCO Global Geopark is located at an extension foot mount East of the Himalayas. Geoheritages date from the Cambrian (about 550 million years ago) to the present in seven different stages and include palaeobiology, stratigraphy, geomophology, tectonics, karst, caves and also important faults. The geology in this UNESCO Global Geopark reflects important events in Earth history, like of two mass extinction boundaries of Frasnian-Famennian (360 million years ago) and Permian-Triassic (250 million years ago). This includes 3 groups of sedimentary, igneous and metamorphic rocks, as well as stratigraphic, lithostratigraphic and biostratigraphic specificities. Its paleontological diversity shows 19 groups of valuable ancient organisms like ancient fish, ancient flora, brachiopods (eurispirifer tonkinesis), bivalves, trilobites, foraminifera, corals, conodonta, crinoidea and fossilized paths of molluscs.

The Geopark has two natural conservation areas rich in fauna and flora species such as conifers, Asian black bear, Southern serow (a solitary mountain goat) and many species of bird. Moreover, the unusual and mysterious Tonkin snub-nosed monkey is one of the 25 most endangered species of primate in the world. It is only found in Ha Giang province and was believed extinct until its rediscovery in the early 1990s.

Dong Van Karst Plateau UNESCO Global Geopark is home to 17 ethnic groups which creates the unique and rich cultural heritage of this area. The socio-economic life of the Geopark should be improved to achieve the Sustainable Development Goals that Viet Nam committed. Thus, the management Board of Dong Van Karst Plateau UNESCO Global Geopark has associated with its partners in seeking support from organizations to develop sustainable tourism, conservation of heritage values and Earth science research.

The UNESCO Global Geopark’s educational program focuses on 3 subjects: visitors, local residents and school children. Educational methods are varied like using local presenters, panels, brochures, guide books, posters and visual aids, and are integrated with the daily activities of the local people, school children and tourists. The educational activities have achieved good results, and the UNESCO Global Geopark is highly supported by the local people. The promotion and conservation activities are done together by local resident, tourists and the government. The number of visitors has steadily increased at a rate of 30% per year. Regional economic development is increasingly oriented to tourism economy, and contributes positively to changing the lives of the 17 ethnic groups of the area and has opened up favourable conditions to fight poverty. More and more local people are involved in this process of sustainable tourism economic development.