“Coexistence of an active volcano and human beings” 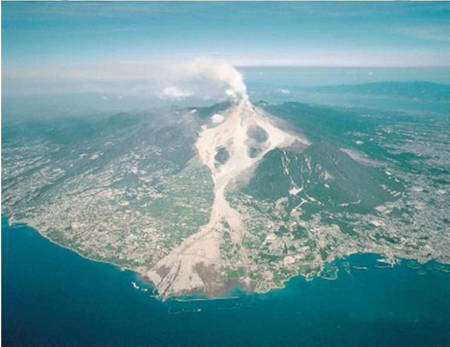 Shimabara Peninsula is a stomach-shaped body of land projecting from the south eastern region of Nagasaki Prefecture, west of Japan. The southern region, with the Pre Unzen Volcano, is characterized by a low, gentle terrain. The Unzen Volcano in the centre of the Peninsula, is actually composite volcano formed by a number of volcanoes with 1,000 m above sea level; Mt. Fugen (1,359.3 m), Heisei Shinzan (1,482.7 m), Mt. Myoken (1,333 m), Mt. Kunimi (1,347 m). The northern and eastern parts are on a wide fertile volcanic fan where agriculture is carried out.

The theme of Unzen Volcanic Area UNESCO Global Geopark is “the coexistence of an active volcano and human beings”. The area around Unzen volcano was designated as the first national park in Japan in 1934 and its natural environment has been conserved since then.

In southern part of the UNESCO Global Geopark, basaltic lava flows erupted around 4.3 Ma, which is the oldest volcanic rock in the area. In the south-western part, andesitic lava flows and debris flows with an age of 2.5-1.5 Ma are present. Activity of the Unzen Volcano which is located in the centre of the area has started about 0.5 million years ago and is still ongoing. Its lava is dacitic and produced many lava domes, lava flows, and pyroclastic deposits. In the area two significant volcanic disasters occurred in historic times: the large sector collapse event of Mayuyama dome happened during the 1791-92 eruption (“Shimabara Catastrophe”), and the attack of repeated pyroclastic flows and associated debris flows took place during the 1990-95 “Heisei” eruption. The Heisei eruption is the first eruptive event which was scientifically recorded in detail by observations of the magma, generation of the lava dome, and pyroclastic flow formation.

About 150,000 people are living in the area of the Unzen Volcanic Area UNESCO Global Geopark.

Unzen volcano gives humankind a lot of gifts: out-standing landscapes, hot springs, spring water, fertile agricultural soil, and so on. On the other hand, Unzen volcano erupts repeatedly and causes serious disasters. In 1792, about 15,000 people were killed by the tsunami derived from the strong earthquakes due to sector collapse of an old lava dome, one of the worst volcanic disasters in Japan. In 1991-1995, a part of lava dome at the summit of the mountain collapsed. The pyroclastic surges containing giant hot ash clouds took 44 lives. Many buildings, houses, and school were also completely burned or buried by the flows and many residents lost their proper-ty. This eruption has damaged both local tourism and the economy. Local residents, however, have recovered repeatedly from these volcanic disasters.

Passing on the knowledge and recovery experience of volcanic disasters to future generation is very important. That’s why the burned school building and destroyed houses of the last eruption have been preserved just as they were. Now, these facilities are the main geosites of the Geopark and have been utilized widely for local disaster prevention educational programs in Japan. As a conservation activity, local residents regularly carry out a cleaning of geosites.

Educational programs for elementary and junior high school students are established. All 6th grade elementary school students and 1st grade junior high school students in Shimabara City participated in the program every year and learn about the values of local heritages. For local residents, the professional staff at the Executive Office of the UNESCO Global Geopark holds workshops to introduce the concept and features of the UNESCO Global Geopark, targeting school teachers, employees at accommodation facilities, and administrative officers. To achieve sustainable development of the area different partners from administration, government or tourism boards cooperate with each other on the basis of specific action plans and promote the UNESCO Global Geopark audience, dedicated to geological topics.

Participation in the national radio programme Radio3 Science in Matera (European Capital of Culture 2019) at the event MATERADIO to tell the story of the ancient Pollino glacial plateau, monitoring of the existing snowfield and the application as a UNESCO Global Geopark.