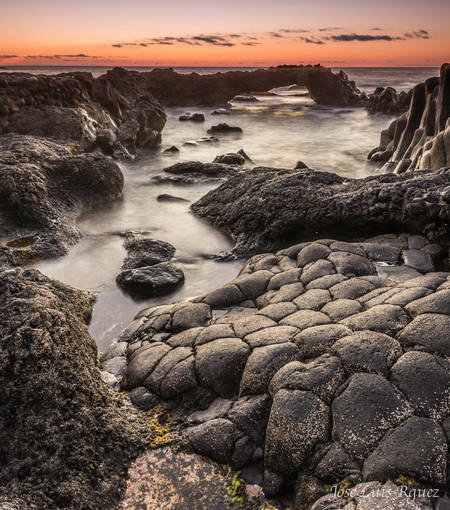 El Hierro is the smallest of the larger Islands of the Canary Islands Archipelago. It is located at the very southwest part of the Archipelago and it is no more than 30 km in length. The territory of the El Hierro UNESCO Global Geopark covers the whole of the Island of El Hierro (278 km2) and includes a marine area around the whole Island (about 312 km2), forming a total area of 595 km².

El Hierro is the last volcanic Island in the Canary Islands Archipelago to emerge above the level of the sea 1.2 million years ago. It is in the early stages of construction with the greatest density of volcanoes in the Archipelago. It has over 500 open craters and another 300 which have been covered by more recent lava flows. The Island’s construction was very rapid, and this has led to the creation of highly unstable reliefs over short periods of time, causing several giant landslides. Some of these have their morphological expression in the form of arch-shaped megastructures. The most recent activity took place on 10 October 2011, when an underwater eruption occurred at a depth of 300 m, 1.5 km to the southern coast, so the geological underwater heritage is part of the UNESCO Global Geopark.

Since 1986 many visitor centres and museums have offered educational services including a wide range of educational resources (maps, video, books, etc.) to meet groups, and have specialised staff to advise the group during their stay. The activities are guided by the specialised staff at the Centre, and tend to be structured around: guided itineraries to study various natural and cultural aspects of the environment in an interdisciplinary manner, environmental workshops (recycling, solar energy, etc) which allow the practice of environmentally-friendly behaviour in everyday activities, geology workshops to learn more about local geodiversity, simulation games for arriving at environmental decisions, fieldwork techniques of observation and research, classroom activities: talks, audiovisual displays, etc.

Although nature and culture are the main tourist attractions, the Island also has various additional resources such as its involvement in research into renewable energies, with the example of the hydro-aeolic plant, a worldwide reference for innovation.