“Rocks from the oldest continent: where geological wonder and legend meet” 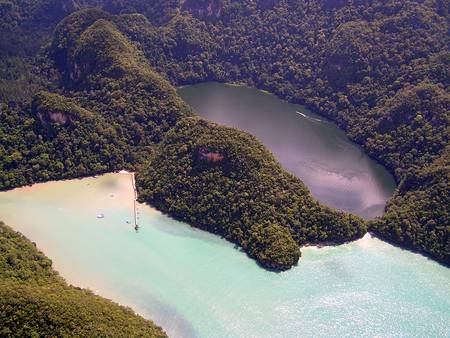 Langkawi UNESCO Global Geopark is located in the far north-western corner of peninsular Malaysia. Located in the northern State of Kedah, it is unique in the sense that it was formed on 99 islands that together made up the legendary Langkawi Archipelago. The natural landscape of Langkawi is a combination between highly vegetated hills of rainforest and some rather barren rocks.

The Geopark has the best-exposed and most complete Palaeozoic sedimentary sequence in Malaysia, from the Cambrian to the Permian period. Langkawi UNESCO Global Geopark was part of Sibumasu Block. During Early Permian, the Sibumasu Block broke out from Gondwanaland, rifting northward and collided with the East Malaya-Indochina Block to form the Southeast Asian mainland. Later, during the Mesozoic, the islands underwent a major tectonic event that resulted in the emplacement of its numerous granitic rocks. At the same time, the entire Peninsular Malaysia was uplifted, including the Langkawi islands. Much of the geological development was somewhat linked to what had happened in the old supercontinent Pangea and southern hemispheric Gondwanaland since more than 550 million years ago. What we have in Langkawi today is the combined result of these various processes and the ongoing weathering process that has taken place since the Langkawi land was brought to the surface around 220 million years ago.

Located along the Straits of Malacca, famous as an historical trade route in South East Asia, Langkawi UNESCO Global Geopark has accumulated numerous legends, myths and historical connections with the surrounding area. This heritage, combined with the traditional fishing and farming village, adds charm to the local culture. To maximize the experience with natural and cultural heritage, accommodation and facilities are available in this geopark to suit visitors.

The educational and awareness programs of the Langkawi UNESCO Global Geopark were enhanced by the Geopark School and Geopark Community Program. Geopark Clubs have been established at the schools in Langkawi as a medium to disseminate information and center activities. The Langkawi Geopark Management Plan established guidelines for the management of Langkawi’s natural & cultural heritage using a sustainable development approach which is anchored on the principles of social equity, economic efficiency and ecological sustainability.