“More than 5,000 poems have been inspired by Mount Yandangshan” 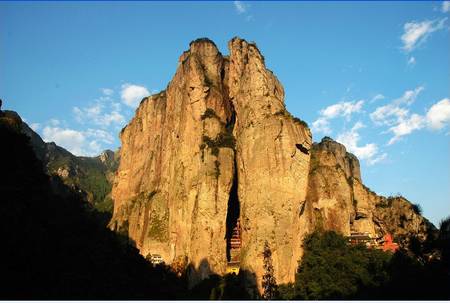 Mount Yandangshan is an ancient Cretaceous rhyolitic volcano. The trending subduction from Yizenaiji - Kula - Pacific plate oblique to the Asian continental plate was made at a low angle, and the strong crustal movement recorded complete geological evolution of volcanic eruptions - collapse - resurrection and uplift in Mount Yandangshan. Four volcanic eruptions occurred and four top-down rock geological units were formed. After being faulted, cut and uplifted, the caldera of Mount Yandangshan has become a natural three-dimensional model of a caldera and is also known as a natural museum of rhyolitic volcanics. The geology, petrofacies, rocks and other volcanic landscape, and exotic layers, sharp peaks, rock crosscut caves, waterfalls and other landscapes are well preserved in the park and form the Mount Yandangshan landscape. Thick rhyolite pillars contribute to the beauty of Mt. Yandangshan. It is said that these pillars are the ‘bones of the mountain’. The exploration of Mt. Yandangshan began more than 1,200 years ago and endured through successive dynasties. The early Chinese scientist Shenkuo, in collaboration with Joseph Needham, an English scientist, set forth the theory that the landscape was formed as a result of erosion carried out by running water. Earlier Chinese thinkers, too, drew inspiration from the mountain.

Mount Yandangshan has long inspired artists and thinkers with its grandeur. More than 5,000 poems have been inspired by the mountain since the Tang and Song Dynasty and over 30 books have been written about its scenery, ecology and culture. Moreover, the mountain has spawned a culture of stone carving at Changyudongtian where local craftsmen employ expert understanding of the different lavas to create a colorful stone culture. Today, there are more than 400 spots where visitors can appreciate cloud-kissing cliffs and colorful carved stones.

Since the UNESCO Global Geopark was built in 2005, the purposes of "heritage protection, science education, the development of tourism" have always been a priority. A 23-acre Geological Museum has been constructed for science education. The geological science interpretation system has been improved within the park and a user-friendly science gallery in each park has been built. Scientific knowledge going into schools and community activities have been actively carried out. Infrastructure has been continually upgraded and with the improvement of brand awareness, the tourist accommodation has increased year by year, becoming a significant element for promoting the sustainable development of the local economy in Mt. Yandangshan.