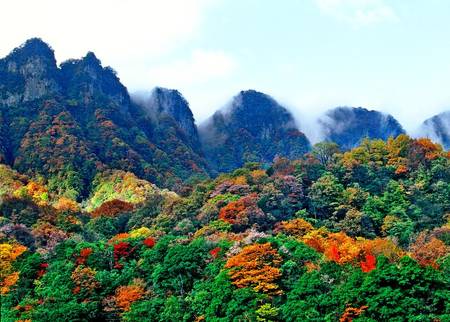 Guangwushan-Nuoshuihe UNESCO Global Geopark is located in Bazhong, Sichuan Province of southwest China. This region has a subtropical monsoon climate. The Geopark’s topography consists of moderate to deep cut mountains with higher altitudes in the north and lower altitudes in the south. Guangwushan, the main peak of Micang Mountain, with a height of 2,507 meters, is the highest point of the Geopark.

The region is located at the junction area of the southern central Orogenic Belt (the Qinling) and Yangtze Block. The natural landscape of the area reveals a sedimentary sequence of the northern Yangtze tectonic plate, karst landforms, waterfalls and ponds as well as tectonic landforms. It is an important place for analysing the geological evolution of the peripheral basins of the Tethys, Central Orogenic Belt, Daba Mountains Orogenic Belt and Sichuan Basin, and the Yangtze Block. The area is of great scientific importance about research on continental dynamics, processes of mountain building and the structural relationship between the northern Yangtze tectonic plate and the orogenic belts of the Longmen and Daba mountain ranges. It marks the transition zone between southern and northern karst landforms with karst formation both on and below the surface. Important paleontological fossils were found in this region such as Shuotheriumdongi, one of the oldest mammal fossils, which was discovered in 1982 at Ganchang Town, and later named by academician Zhou Mingzhen of the Chinese Academy of Sciences.

Guangwushan-Nuoshuihe UNESCO Global Geopark is one of the largest protection zones worldwide for Fagus pashanica, a living plant fossil from the glacial period. The area is also known as the hometown of red leaves in China.

The Guangwushan-Nuoshuihe UNESCO Global Geopark comprises 17 villages and towns with about 120,000 residents.

Since the Qin Dynasty and the Han Dynasty, the Ancient Micang Road winds itself through the landscape between Shaanxi and Sichuan connecting the civilizations of the ancient Yellow River and Bashu. Traces of many cultures and different dynasties can be found along this ancient road. Historical relics of local significance include the Drum Beating Village Ruins of Neolithic Age, the cities of Guancangping and Muyang of the Qin and Han Dynasties, Bazhong Grotto and Pingliang City of the Tang and Song Dynasties as well as the Baiyi and the Enyang Ancient Town. These relics provide unique insights into the historical and cultural development of China. The Ba-ethnic culture of the region is characterized by local folk traditions such as traditional wedding drums, Bazhong Shadow Puppet show, Maoshan Folk Songs, the Bashan Beier Song or the Fanshan Jiaozi Dance, national intangible cultural heritage of China.

Guangwushan-Nuoshuihe UNESCO Global Geopark has a high scientific value with a great amount of research being carried out in the region. Science popularization and the protection of geoheritage is of particular importance. Since the establishment of the Geopark, many human and material resources have been invested in protection initiatives; protection zones and tourist passages have been established, along with explanation boards, fences and other conservation measures, particularly targeted at geoheritage sites, landscape and the ecological environment.