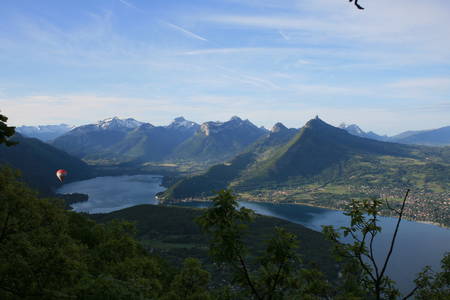 The Bauges Massif is located in the northwestern part of the Alps in France. The border of the Geopark perfectly fits with the existent Regional Nature Park. It appears as a rocky fortress or preserved natural island with high summits in contrast with the outer crown of lower valleys. Between 30 and 40 million years ago, the Alpine uplift gently folded and faulted limestones and marls which had accumulated during 180 Ma from the Jurassic to the Paleogene. The uplift shifted them to the West forming parallel ranges and crests in a sort of sub meridian stream. The differences of intensity in the sedimentation series lead to two different types of landscapes, conformable on the West and inverted on the East symbolized by perched synclines. The territory presents a folded medium altitude (< 2 200 m asl) mountainous relief built with only sedimentary rocks. Vertical cliffs (up to 1000 m high) and glaciers valleys (300 m asl) surround the massif and delimit the Geoparks boundaries. The territory now appears as a water tower with numerous karstic networks, deep and narrow canyons and waterfalls supplying the two largest natural lakes in France.

The Massif des Bauges UNESCO Global Geopark is located in the northern French Alps, 50 km south of Geneva. Its 64 municipalities cover an 856 km² area distributed among two Departments (Savoie and Haute-Savoie) which are part of the Rhône-Alpes Region. The territory appears such a rocky fortress, a preserved natural island of 70 000 inhabitants, emerging as a single thrust from urbanized valleys of 450 000 inhabitants and 6 big cities. The territory is rich in historical monuments from the 1st to the 19th century, such as towers built with local limestones.

The UNESCO Global Geopark is responsible for sustainable development policy on the territory and its Regional Nature Park Charter defines a sustainable development plan for 12 years including economic development (agriculture, forestry, and tourism), education and preservation of heritages. It gives support to the communities on country planning. In association with the Ministry for Education, it organizes a network of environmental educators and provides an annual educational program which concern more than 2000 children each year. The UNESCO Global Geopark also works closely with the farmers and foresters in order to develop these two major economies while preserving resources and biodiversity. It helps to promote local products like cheeses, honey, wines, aromatic and medicinal plants, chocolate … linked with the territory and to develop denominations of origin.

Numerous and varied museums and sites of interest welcome visitors interested in the area. In the Massif des Bauges UNESCO Global Geopark, geotourism concerns not only geology, but also closely linked themes. For example, local wine producers have long been aware that the quality and originality of their wines are due to the area’s soils and exposures. Wines (red and white wines "Vins de Savoie" with 10 vintages) and cheeses ("Tome des Bauges") have a denomination of origin. The essence of the Geopark is well captured by producers that have developed guided tours linking geology and landscape to wine.