“The gypsum-bearing Kraus Cave of Gams was the first cave in the world to have electric light installed for the public in 1892.” 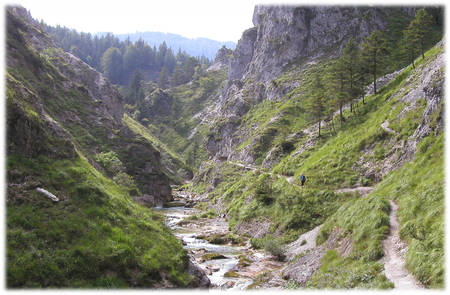 The UNESCO Global Geopark is located in the north of the Austrian province of Styria. With an area of 586 km2 it is the largest Nature park of Styria. Geographically, it is part of the Northern Calcareous Alps which constitute the northernmost mountain chain of the Eastern Alps. The landscape is dominated by mountains up to 1000 m, broad valleys of the main rivers Enns and Salza and deep gorges of its tributaries. The Cretaceous to Paleogene rocks of the Gams Basin are famous for their fossils and exposures of the Cretaceous-Tertiary boundary which document one of the major catastrophes in the history of Earth. Rivers have cut deep gorges into the limestone and in the conglomerates deposited at the Great Ice Age. Water seeping along the fractures has dissolved the rocks leading to the formation of caves and of springs some of them having enormous capacity. Among the protected caves a large gypsum cave, an Ice cave and a cave which has yielded cave bear remains and some remarkable 30,000-year-old artefacts.

The Styrian Eisenwurzen UNESCO Global Geopark is located in the Northern Calcareous Alps which is the northernmost mountain chain of the Eastern Alps. The landscape is dominated by mountains up to 1000 m in elevation, broad valleys of the rivers Enns and Salza with deep gorges of their tributaries. More than half of the area is covered by forests.

Ongoing research since the first half of the 19th century has accumulated a wealth of geological data of the region. It is one of the key areas for the tectonic interpretation of the Northern Calcareous Alps. Mesozoic limestones and dolomites are the main rock types. The Middle Triassic Anisian stage (245 - 237 million years ago) was established in 1895 within the UNESCO Global Geopark area. It was named after the Latin name of the near-by Enns river. Of international importance is also the Gams basin with its Cretaceous to Paleogene sequences (90 to 55 million years ago). The basin has yielded fossil faunas of corals and molluscs including ammonites, snails, bivalves. Remarkable fossils include also reefs of rudists, a kind of sessile bivalves. On the landscape, moraines and river terraces are witnesses of the Great Ice Age. Intense karstification has resulted in the formation of remarkable caves and springs which are a major source for the water supply of the City of Vienna.

The geopark’s three communities have 5900 inhabitants. Besides the breeding of cattle and sheep an increasing number of farmers produce local food specialities. The UNESCO Global geopark owes its name to the large number of small ironworks using the raw material from the close-by opencast mine Erzberg. They were closed down with the beginning of industrialization in the 19th century. The Steirische Eisenwurzen owes its name to a large number of small iron works that use the raw material from the near-by opencast mine Erzberg. Historical churches, houses and manors remind of this time. Remarkable is also the rich heritage of traditional customs.

The GeoTrail of Gams, the GeoWorkshop established for activities of visitors. Many spectacular trails lead through gorges, and caves, the Klaeffer spring of the Vienna water works and the enjoyable Water Adventure Park provide learning experience of geology. Tours for different groups of visitors are led by trained guides and also at the whitewater Geo Rafting geology is communicated as a special educational component. Additionally, special programs have been designed for private participation of local children and for the UNESCO Global Geopark schools. The GeoCenter, the Austrian Forestal Museum Silvanum and the Museum HochQuellenWasser convey additional information on geology, biology and local culture to its visitors. Geotouristic activities often paired with outdoor sports and a consequent improvement of housing facilities has led to a constant increase of visitors in the last years. A close partnership between local producers and the park authorities has led to economic stability of the area.