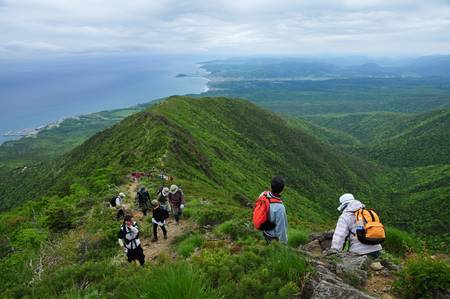 Mount Apoi is 810 meters high and located in Hokkaido, the northernmost island of the Japanese Archipelago. The name Mount Apoi derives from the language of the indigenous Ainu people of Hokkaido. The most distinctive feature of Mt. Apoi UNESCO Global Geopark is its peridotites from the Earth's mantle.

The Hidaka Mountains formed from a collision between two continental plates 13 million years ago. Part of the mantle under the crust was thrust up onto the Earth's surface to form the Horoman peridotite complex, which includes Mount Apoi. The pure peridotites on and around the mountain contain valuable information about the Earth's mantle, making them the subject of global attention. Mt. Apoi UNESCO Global Geopark provides geological information on plate collision, oddly shaped masses made of cooled and solidified magma, and rocks from far-off southern seas.

To support sustainable development in provincial areas, local residents must have a sense of identity with their hometowns. To this end, in 2010 the Mt. Apoi UNESCO Global Geopark Promotion Council in Samani introduced Hometown Geo-workshop lectures to highlight the area’s appeal. Attendees learn about all the resources of their UNESCO Global Geopark (geological, ecological, and human). It should be specially mentioned that the area has supported exchanges with researchers primarily in geology and ecology. In 2013, a total of 344 researchers and university students from 30 institutions came visiting. The expansion of exchanges is largely attributed to the Mount Apoi Research Support Center – a self-catering accommodation facility at the foot of Mount Apoi exceptionally popular with researchers investigating the area and those on university geological field trips.